AFRICA/ALGERIA - The "Days of Augustinian of Hippo" relaunch St. Augustine's teaching on peace 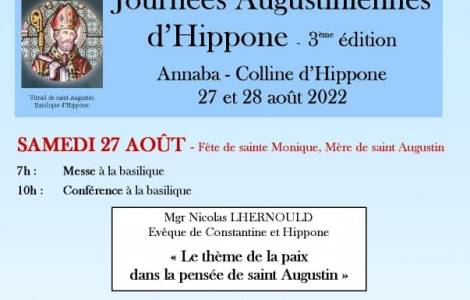 2022-08-26
The "Days of Augustinian of Hippo" relaunch St. Augustine's teaching on peace

2022-04-28
Canonization of Charles de Foucauld: Archbishop of Algiers on the special spiritual path

2022-02-12
The new Archbishop Jean-Paul Vesco takes office in Algiers: "our Blessed are light on our path"

Annaba (Agenzia Fides) - "God" - writes St. Augustine in the XIV book of his work "The City of God" - "desired not only that the human race might be able by their similarity of nature to associate with one another, but also that they might be bound together in harmony and peace by the ties of relationship". Thus the great Bishop of Hippo, theologian and Father of the Church, known as Doctor Gratiae, already at the beginning of the fifth Christian century hinted with the realism of faith to the ideal of unity among peoples (in unitatem concordem) which springs naturally from the gesture of the Creator. With the same realism, Augustine noted that this aspiration remains marked by the consequences of original sin, which sow wars and discords in the hearts of men and among nations. In present times, shrouded in the shadows of new "clashes of civilizations", it can be fruitful and exciting to rediscover the relevance of St. Augustine's teaching regarding peace and the worldly dynamics that threaten it. This is the intuition that seems to move the third edition of the "Days of Augustinian of Hippo" scheduled for August 27 and 28 in Annaba, at the Basilica dedicated to the Saint, built between the end of the nineteenth century and the early twentieth century on the Hill which dominated the ancient Hippo.
On Saturday, August 27, liturgical feast of Saint Monica, mother of Augustine, after the celebration of the mass in the Basilica, the rediscovery of the relevance of Saint Augustine will be entrusted in particular to a conference by Nicolas Lhernould, Bishop of Constantina and Hippo, dedicated to the theme of peace in the thought of the great saint. In the afternoon, participants will visit the archaeological area of Hippo, stopping in particular among the remains of the ancient Basilica of Peace.
On Sunday, August 28, the day on which the liturgy commemorates Saint Augustine, the program of the Augustinian Days also includes the viewing of a documentary dedicated to the great saint and the Hippo Hill.
In his work The City of God, the Christian genius states in suggestive terms the reasons why peace is at the heart of the Church, also with regard to the mission of salvation connected with her pilgrimage through the history of the world: "Therefore" - we read in the nineteenth book of De Civitate Dei "this heavenly city, then, while it sojourns on earth, calls citizens out of all nations, and gathers together a society of pilgrims of all languages, not scrupling about diversities in the manners, laws, and institutions whereby earthly peace is secured and maintained, but recognizing that, however various these are, they all tend to one and the same end of earthly peace". (GV) (Agenzia Fides, 26/8/2022)

ASIA/MYANMAR - A new parish in Kachin state, in the midst of conflict