ASIA/IRAQ - The alarm of Chaldean Patriarch Sako: world crisis and war in Ukraine aggravate the "alarming" exodus of Christians from the Middle East 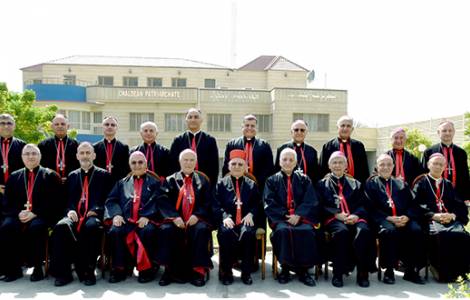 2022-12-05
Walking together in the faith of the Apostles. Interview with Mar Awa III, Patriarch of the Assyrian Church of the East

2022-11-25
Around 20 families a month: Patriarch Sako laments the emigration of Iraqi Christians

2022-10-15
Eviction for Christian refugees in Baghdad: the building where they live must become a shopping center

Baghdad (Agenzia Fides) - The world economic crisis and the global situation marked by the Russian military invasion in Ukraine are also having serious effects on the network of charitable and social works promoted by the Churches in the Middle East. This circumstance is driving the exodus of Christians from the region of the world where Jesus was born, died and rose again. Iraqi Cardinal Louis Raphael Sako, patriarch of the Chaldean Church, raised the alarm about this during his speech with which he inaugurated the work of the annual Synod of Chaldean Bishops being held in Baghdad from August 21 to 27.
In one of the seven points in which he articulated his speech, Patriarch Sako provided details to illustrate the direct effects of the world crisis and the ongoing war in Europe also on the economic stability of the ecclesial solidarity networks active in the Middle East.
The Cardinal explained that "this situation has a negative impact on the economic state of the Church in Iraq, Syria and Lebanon", where the entire population is affected by unemployment, poverty or limitations in water and electricity services. "The economic resources of the dioceses are limited. The charities that helped us are now focusing their efforts on Ukraine. Donations and collections are very small, the offerings do not arrive, the rents of the buildings, already very low, are not paid regularly... Even the students of our schools have difficulties to pay the fees so the Christians are requesting to be exempt", indicated the Chaldean patriarch who added that the Christians do not even cover the cost of the electric generators.
Patriarch Sako recognized that the economic heritage of ecclesial institutions is also still based on real estate and wondered if the time has not come to start selling these assets to face the new emergencies posed by these difficult times. The cardinal recalled that already at the 2021 annual Synod, the creation of a “Chaldean common fund” was arranged as a tool to address the growing needs and crisis situations faced by each diocese.

In his speech, the Chaldean Patriarch Sako distanced himself from the temptation to make the continuity of the Christian presence in the Middle East depend on temporary technical solutions. Addressing his fellow bishops, the Patriarch recalled the common call to "carry out our ecclesial, human and national responsibility with the spirit of Christ and with his sentiments", a vocation that can only be nurtured by a "living and passionate relationship with Christ, the One to whom we have been consecrated as he himself was consecrated". Only the experience of the grace given by Christ can also help the Chaldean bishops to carry out "our mission and our service with generosity and selflessness, in a spirit of unity, far from particularism and the desire for power and fame". The cardinal recalled that the pastoral guidance of the dioceses "cannot be exercised without power", but that exercise "must not reach despotism and dictatorship", given that episcopal authority is based "on apostolicity" and is exercised through a collegiality "that extends to all the members of the People of God, priests, men and women religious, lay men and women". The Patriarch encouraged the Chaldean bishops to exercise "paternal and non-authoritarian accompaniment of priests, as is done with children", facing conflicts and difficulties "face to face". There will always be difficulties and problems, added the Cardinal, "as in the times of the Apostles of Christ, but they must become occasions to live charity", always taking into account the fact that
"discipline is important", while "disorder destroys". (GV) (Agenzia Fides, 23/8/2022)