AFRICA/NIGERIA - "Confiscate the assets of human traffickers": the campaign also promoted by the Catholic Church is underway 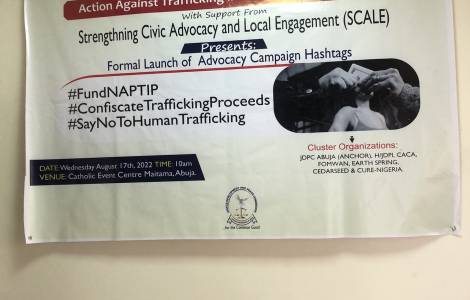 2023-01-25
The Nigerian Bishops' Conference: 'Published figures of priests killed or abducted are incorrect'

Abuja (Agenzia Fides) - "Confiscate the assets of human traffickers". This was stated by the Auxiliary Bishop of Abuja, Msgr. Anselm Umoren, who together with the president of the Justice, Peace and Development Commission of Abuja, lawyer Damian Dodo, and the director of the National Agency for the Prohibition of Trafficking in Persons (NAPTIP), Arinze Orakwue, has called on the Nigerian National Assembly to provide the legislative framework for the courts to seize the assets of human traffickers.
According to the appellants, this will not only weaken criminal networks in the fight against human trafficking in the country, but will also create space for victims of crime to be compensated for the damages they have suffered.
"We need a legislative framework that allows courts not only to confiscate the proceeds of human trafficking, but also to start implementing the concept of restorative justice", says Attorney Dodo, SAN. "Therefore, it is not enough for the government to confiscate the proceeds of human trafficking, but the victims of this evil crime must benefit from the proceeds. The victims are not helped at all by the sentence alone. Innocent victims who are exploited, abused and traumatized, whose lives have almost been destroyed, should be able to receive some form of compensation from the proceeds", underlines the lawyer, who was the first president of NAPTIP.
Msgr. Umoren highlighted the insufficient funding of the government agency in charge of combating the threat. According to the Auxiliary Bishop of Abuja, this means that victims do not receive adequate assistance from the State, while trials against traffickers remain underfunded, allowing perpetrators ample room to escape conviction.
Monsignor Umoren pointed out that human trafficking has gone from sexual exploitation and domestic servitude to organ harvesting. "Human trafficking is an industry that moves billions of dollars around the world," Bishop Umoren declared during the press conference.
The current president of NAPTIP, Orakwue, finally underlined that human trafficking threatens the development of the nation's human capital.
During the press conference, the following hashtags were released for use on social media to promote the campaign to confiscate traffickers' assets: #FundNAPTIP, #ConfiscateTraffickingProceeds, #SayNoThumanTrafficking.
According to the former permanent representative of Nigeria to the United Nations, Martin Uhomoibhi, in 2016 alone, 602,000 Nigerians attempted to emigrate to Europe through the Sahara desert. According to Uhomoibhi, 27,000 of these migrants died during the journey; of those who died during the journey, 68% were Nigerian graduates. (L.M.) (Agenzia Fides, 19/8/2022)