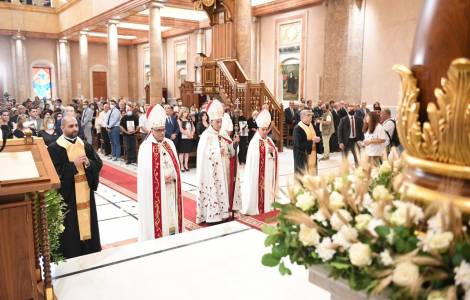 Beirut (Agenzia Fides) - Maronite Patriarch Béchara Boutros Raï invites the Lebanese to believe "in the resurrection of Beirut and Lebanon, so that our nation can once again be 'the beacon of the East" and "the homeland of encounter and of dialogue of civilizations and religions".
But he also raises his "indignant voice" to all those responsible for the explosion that devastated the Port of Beirut on August 4, 2020 "whoever they are, and wherever they are". With these tones, the Lebanese Cardinal called on everyone to keep alive the memory of that tragic event which remains like an open wound in the recent history of the Lebanese nation. He did so in the homily delivered during the suffrage mass for the victims of the port explosion, celebrated in the Cathedral of St. George in Beirut on Thursday, August 4. Many families of the victims took part in the liturgical celebration, and no exponents of Lebanese institutions and political forces took part.
The explosion, defined in the past as "mysterious" by the Lebanese Cardinal himself, caused 221 deaths and more than 6,000 were injured, many of whom permanently disabled.
Two years after the tragedy of the Port of Beirut - the Maronite Patriarch remarked - the tragic story of the port of Beirut appears marked by two unpunished crimes: alongside the crime of the explosion, the crime of covering up investigations has also been added over time, defined by the Patriarch as "no less scandalous than the explosion", as it is configured as "a deliberate act" that sowed further pain among the families of the victims. The authorities - continued the Maronite Patriarch - "cannot ignore what happened: some caused the explosion, while others, who knew the existence of explosives and their dangers, escaped; others were silent and still others blocked the investigations, freezing the work of the judge in charge".
The Patriarch drew the scenario of a real sabotage, orchestrated with a certain division of roles by a certain number of officials of the political, institutional, judicial and intelligence apparatuses. "God" added Cardinal Béchara Boutros Raï "will judge those responsible for the explosion and who blocked the investigation". The Maronite Patriarch also made a request for an independent international investigation to shed light on the explosion in the port of Beirut, freeing itself from sabotage and misdirection carried out in the internal Lebanese scenario. "If we insistently ask for the formation of a new government and the election of a new President of the Republic" - added the Maronite Patriarch - "it is because we want the story of the explosion in the port of Beirut to be placed at the top of their priorities, as a commitment to be made before God, the homeland and the families of the victims".
During the homily, Cardinal Raï also thanked Pope Francis for the words expressed by the Bishop of Rome in St. Peter's Square, at the conclusion of the general audience on Wednesday, August 3. "My thoughts", the Pope said, referring to the explosion in the port of Beirut, "goes to the families of the victims of that disastrous event and to the dear Lebanese people: I pray that everyone can be consoled by faith and comforted by justice and from the truth, which can never be hidden".
On August 4, while commemorative ceremonies were underway in the Beirut port area to commemorate the tragedy, a second block of silos damaged by the explosion in 2020 collapsed. In recent weeks, due to high temperatures and of the fermentation of the grain still present in the silos, fires had broken out which further damaged, the already unsafe, structure. (GV) (Agenzia Fides, 5/8/2022)