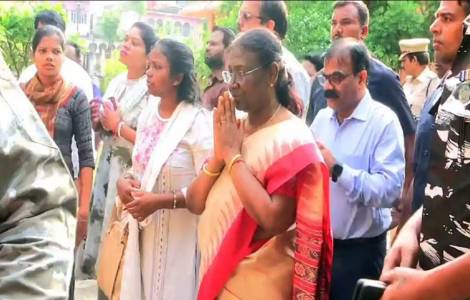 New Delhi (Agenzia Fides) - Christians in India welcomed the election and inauguration of Drupadi Murmu, 64, as president of the country on July 21. Murmu is the first indigenous president and the second woman to hold the highest office in the nation. She succeeded Pratibha Patil, who held the position for five years since 2017. Murmu was the presidential candidate of the National Democratic Alliance (NDA) led by the Bharatiya Janata Party (BJP), and she is a member of the BJP. As many as 44 political parties supported Murmu in the presidential election, while 34 parties backed opposition candidate Yashwant Sinha, a former finance minister and diplomat.
Born in Uparbeda village, Mayurbanj district, Odisha, eastern India, Murmu was sworn in on July 25 as the 15th President of India. She belongs to the Santali tribe, which is the second largest tribal community in India, a nation that has more than 700 recognized indigenous communities, totaling more than 104 million indigenous people, or almost 9% of the 1.4 billion of inhabitants of India. "It is a source of pride that India officially has its first president from a tribal community. We hope she will defend the rights of the indigenous peoples of the country", said Fr. Nicolas Barla, Secretary of the Tribal Affairs Office of the Bishops' Conference of India (CBCI) to Fides.
The priest recalls that Murmu served as the governor of Jharkhand State from 2015 to 2021. During this period, Murmu refused to consent to a bill, passed by the Jharkhand Legislative Assembly, which made amendments to the "Chhotanagpur Tenancy Act" of 1908, and the "Santhal Pargana Tenancy Act" of 1949. Both of these Acts safeguarded the rights of tribal communities to their lands. The new bill gives government or private entities the ability to make commercial use (lease or concession for resource exploitation) of land. Fearing harm to indigenous communities, Murmu did not sign the measure. Murmu has always been concerned with the welfare and development of indigenous communities. Now, as president, she will uphold constitutional rights for all. We hope that Murmu will implement the existing legislation for the tribes and their development", Fr. Barla notes. However, the situation of the tribals in India is complex, explains the priest. Tribals are the original inhabitants of the country. About 55% of the communities are underdeveloped.
Sister Lalita Roshni Lakra, from the CBCI Commission for Tribal Affairs, told Fides: "We members of the tribal community are extremely happy and proud to have a tribal woman president for the first time in India". "My expectations for the new president are different: we hope for laws to ensure the safety and protection of women; measures to get the tribals due justice", notes Sister Lakra, lawyer and social worker, belonging to the Daughters of Saint Anne in Ranchi. "In many states of the Federation, such as Assam, Delhi and the Andaman Islands, tribal communities are not recognized and are deprived of their civil and social rights", she notes. "Tribals, whose identity is made up of three elements: jal, jungle, jameen (water, forest and land) should not be exploited. Murmu should promote the education of of tribal girls. We pray that she will do what the tribal communities of India expect of her, and that she becomes a role model for indigenous girls and women", observes the nun. Among the voices gathered by Fides, Father Anil Kumar Kujur, priest of the diocese of Sambalpur, in the state of Odisha, hopes that Murmu "will promote sound policies and programs for the development of tribes and marginalized communities throughout the country".
Fr. Xavier Camil Tirkey, priest of the Archdiocese of Cuttack-Bhubaneswar, recalls that "Murmu comes from a humble background and has the task of meeting people's expectations".
Shilpa Ekka, leader of a youth group and Catholic tribal woman, notes to Fides: "We hope that Murmu will be above any situation of particular interests or party and that she will work to help people in need". It should also be noted that in 2017, Murmu, as governor of the state of Jharkhand, passed the "Freedom of Religion Bill" an "anti-conversion law" which makes the incitement of a person converting one's religion an offense punishable by imprisonment. The law requires everyone to inform the police of the circumstances of a religious conversion. (SD/PA) (Agenzia Fides, 28/7/2022)

AMERICA/BRAZIL - After 50 years, the mission of Cimi is still "to defend with courage and prophecy the cause of the indigenous peoples"