AMERICA/BRAZIL - Women and migrants are the main victims of human trafficking; labor slavery on the rise 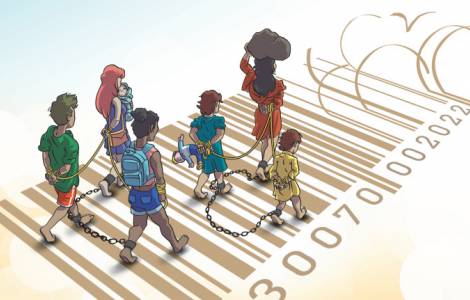 2022-09-15
Towards the elections of October 2: the bishops meet the candidates

Brasilia (Agenzia Fides) - In 2013 the General Assembly of the United Nations established that July 30 would be celebrated every year as the World Day to combat human trafficking. The aim was to "create greater awareness of the situation of victims of human trafficking and to promote and protect their rights".
According to the so-called "Palermo Protocol", adopted in New York on November 15, 2000, the phenomenon of human trafficking consists in the act of commercializing, enslaving and exploiting people as if they were commodities. Even if there is consent from the victim, these acts are classified as a crime.
According to global UN estimates, around 2 million people are victims of human trafficking every year, mostly vulnerable people. According to a Report from the United Nations Office on Drugs and Crime (UNODC), women are the most affected: in 2018, for every 10 victims detected globally, five were adult women and two were young girls. Migrants, especially those who are not allowed to work or stay in the country where they are exploited, are particularly vulnerable groups and represent a significant percentage of victims at a global level. The Auxiliary Bishop of Porto Alegre and member of the Special Pastoral Episcopal Commission for the Fight against Trafficking of Human Beings (CEPEETH) of the National Conference of Bishops of Brazil (CNBB), Msgr.Adilson Pedro Busin, in a video for the occasion, underlines that human trafficking seems to be far from the Brazilian reality, however it is very present in the country and manifests itself in slave labor, begging, trafficking for sexual and organ exploitation. The role of the Church, according to the request of Pope Francis, is to work in the field of prevention, raising awareness and addressing the phenomenon of trafficking, which is considered a scourge.
On the occasion of this date, the CNBB Commission for the Fight against Human Trafficking produced a poster and invited communities to be attentive to Catholic televisions and social networks engaged in combating trafficking. Furthermore, the communities are invited to organize a moment of reflection on this issue on July 30th.
In Brazil, federal law no. 13.344 / 2016, which in addition to defining human trafficking, guarantees the reintegration of victims into society. This year marks the 25th anniversary of the National Campaign for the Prevention and Fight against Slave Labor. During a meeting that celebrated the anniversary of the first campaign with the motto: "With an eye open so as not to become slaves", experiences were shared and objectives and strategies were discussed. In addition, a letter was drafted addressed to the entire society recalling the long history of the struggle against slave labor in Brazil.
Among other things, the document reads: "From 2003 to 2013, an average of 4,000 people were found in slavery each year, most of them in the countryside. Since 2014, and for seven years, this number has been much lower: "only" thousands of ransomed per year, as if the reality of slavery had receded or the vulnerabilities that expose certain groups to the risk of slave labor had disappeared. (...) Since 2021, there are unequivocal signs to refute the hypothesis of the decline of slave labor. All states in the country are concerned. About 2,000 people were saved last year and we are already a thousand at the end of July".
"Slave labor exists, yes! And our cry continues to be indispensable", the letter reiterates, confirming that we are still far from the goal of its eradication. This crime - one of the most visible manifestations of human trafficking - is still "gently punished" and continues to trample the dignity of thousands of workers: in the countryside and in the cities, migrants and immigrants, black men in the vast majority, even women (even if invisible, especially in domestic work), adolescents, the elderly, natives, quilombolas.
The experience of the Campaign teaches that saving from slave labor does not eradicate the system of slavery, as "the roots of this crime are multiple and interconnected, requiring an integral approach, with articulated actions". The signatories of the letter in the conclusion reiterate: "we will continue in this fight. We will continue to open our eyes, encourage surveillance, expand and adapt our actions ... " (SL) (Agenzia Fides, 28/7/2022)

AFRICA/NIGERIA - "Confiscate the assets of human traffickers": the campaign also promoted by the Catholic Church is underway