ASIA/SYRIA - Attack on the inauguration of the church of Saint Sofia, wanted by the Russians 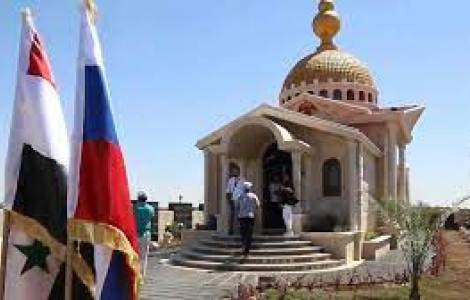 Hama (Agenzia Fides) – Two people were killed and 12 injured on Sunday, July 24 by bombardment of a church as it was being inaugurated in the Syrian village of al-Suqaylabiyah, not far from the city of Hama. The small church intended to serve the local Greek Orthodox community, has a unique history: it wants to recall the ancient Constantinopolitan Basilica of Santa Sofia (Hagia Sophia, since July 2020 also re-used as a place of Islamic worship for will of the Turkish authorities), and was built in record time on Syrian territory on the initiative and thanks to the support of Russian political and military sectors.
Official Syrian sources attribute the attack to unspecified "terrorists". The rocket fired which sowed death and pain among the Christians who rushed to the inauguration was probably launched from a drone. Rebel militias and armed groups of Islamist origin, fighting with the Syrian apparatuses and partly supported by Turkey, still control parts of the Syrian provinces of Idlib, Aleppo, Hama and Latakia. Two days before the attack on the church’s inauguration ceremony, bombings attributed to the Russian air force had caused seven deaths (including 4 minors) in the Idlib region. Even Yohanna X, Greek Orthodox Patriarch of Antioch, in a phone call with the Greek Orthodox Metropolitan Bishop of Hama described the attack on the inauguration of the Christian place of worship as a "cowardly terrorist attack". The Patriarch - reports the Arab news site abouna.org - invoked God's consolation on the relatives of the victims and the speedy recovery for the wounded.

In al-Suqaylabiyah, as reported by Fides (see Fides, 29/7/2020), two years ago, with the approval of the Damascus government, and with the support of Russian political and military sectors, the construction of a church dedicated to Divine Wisdom began, erected with the declared intention of reproducing, albeit at a reduced size, the architectural profile of Hagia Sophia, the ancient Byzantine Basilica of Constantinople - today Istanbul - recently converted into a mosque by the Turkish authorities.
The Syrian "mini-Hagia Sophia", was presented by sources close to the government of Damascus, as a sort of Russian-Syrian response to the Turkish choice to re-open Hagia Sophia to Islamic worship.
Before the Syrian war, the town of al Suqaylabiyah was inhabited by about 20,000 Orthodox Christians. According to unverifiable information, relaunched through social networks by activists and propagandists close to the Syrian government, the laying of the first stone of the church took place in al Suqaylabiyah (a town in the governorate of Hama inhabited before the war by about 20 thousand Orthodox Christians), in the presence of representatives of the Moscow Duma (the Russian Parliament) and with the placet of the hierarchies of the Greek Orthodox Patriarchate of Antioch (based in Damascus).
According to some reports, the construction of the church was made possible thanks to the direct operational contribution of the Russian military stationed in the base near Latakia. Nadel al Abdullah, who is in particular known for having led a militia that presented itself as a self-defense force composed of Orthodox Christians, indicated among the paramilitary groups deployed with the Assad regime in the conflict against the militants jihadists of the Islamic State (Daesh) or of Jabhat al Nusra. Syrian and Lebanese media had at the time also relaunched the statements of the Russian parliamentarian Vitaly Milonov, also known at home for the campaigns aimed at restoring the ancient name of Constantinople in Russian official publications to indicate the current Turkish city of Istanbul.

The ancient Christian Basilica of Hagia Sophia became a mosque after the Ottoman conquest of Constantinople and was transformed into a simple museum complex in 1934 by the will of Mustafà Kemal Ataturk, founder of the modern Republic of Turkey. (GV) (Agenzia Fides, 25/7/2022)