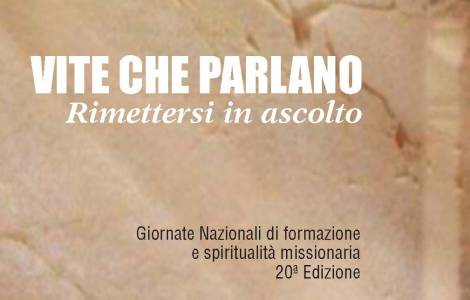 2022-09-12
The heart of the mission ad gentes: to deepen the phenomenon of migration by moving from “for” to “with”

2022-09-12
Comboni Missionaries, 150 years of mission: an exhibition looking at the General Chapter

2022-09-10
Stories, testimonies and reflections on video for Missionary Month

Rome (Agenzia Fides) - July 30 is the deadline to register for the National Days of Formation and Missionary Spirituality planned in Assisi, organized each year by the National Office for Missionary Cooperation between the Churches of the Italian Episcopal Conference and the Missio Foundation. Bible scholars, men and women missionaries will offer their testimony in a rich program of talks that will take place in the city of Assisi from Thursday, August 25 to Sunday, August 28, and which will also be broadcast online for those who wish to follow the work remotely (registration until August 6 in this case). “Lives that speak” is the title given to the event that, as is tradition, is part of Missionary October and follows the theme of World Mission Sunday. "The motto "Lives that speak" is an opportunity for a deeper reflection, following the figure of St. Paul as a leitmotiv, throughout the span of his life, from conversion to martyrdom. An example, almost a paradigm of ad gentes: his is truly an example of a ‘life that speaks’", explains Don Giuseppe Pizzoli, General Director of the Missio Foundation. Four very intense days that will start on Thursday with a lecture by the theologian Laura Verrani aimed at delving into the most significant aspects of the life of the Apostle to the Gentiles and the conference "The world has changed... And and the Church? What conversions?" edited by Don Mario Antonelli, Episcopal Vicar for Education and the Celebration of the Faith of the Diocese of Milan. On Friday, the theme “Formed and sent” will be the leitmotif of the speeches planned by Fr. Michele Roselli, director of the catechetical office of the diocese of Turin, Sr. Luigia Coccia, superior of the Comboni Missionaries, Gianni Borsa, communication director of Missio, and Fr. Cesare Baldi, priest of the diocese of Novara and former director of Caritas Algeria. A round table is also planned with Don Olindo Furlanetto, a former fidei donum in Brazil, Sara Foschi, from the Pope John XXIII Community, and Little Sister Daniela Chiara di Gesù. "Discernment and communion: the synodal path" will be the theme of the third day with the opening speech by the theologian Serena Noceti. In the afternoon, it will be the turn of the meeting with various voices on "Collegiality and synodality as part of the nature of the Church" with Don Cristiano Bettega, episcopal delegate for the area of witness and social commitment of the Archdiocese of Trento, Alexandru-Marius Crisan from the Lucian Blaga University of Romania, Ilenya Goss, a Waldensian pastor in Mantova. On the last day, Sunday, August 28, the task of closing the works with the concluding reflections on how to "Guard hope". (EG) (Agenzia Fides, 22/7/2022)