AMERICA - CELAM's message: "It is time to go out, to walk together, it is time for martyrdom and encounter with everyone" 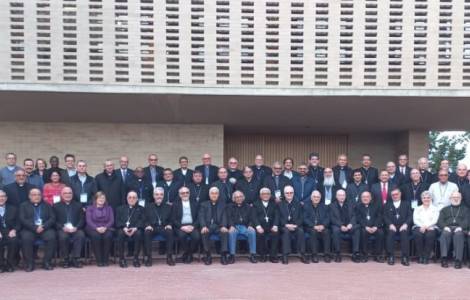 Bogota (Agenzia Fides) - At the end of the Extraordinary Assembly of CELAM (Latin American Episcopal Council), which took place from July 11 to 14 in Bogota, the participants sent a Message to the People of God, reaffirming their "commitment to serve the entire Latin American and Caribbean Church. Since we live in "new times that demand new responses", as Pope Francis affirms, "it is a propitious time to strengthen our personal encounter with Jesus Christ in the reality of the continent and in the heart of the Church". "We need a spirituality with open eyes", underlines the message, which invites a contemplation of God that is not sterile or distant, but "an open sensitivity to the pain and joys of our peoples". "We want to be a Church that boldly and creatively announces the Gospel of Life, especially in the most difficult and forgotten environments on the continent", say the participants in the CELAM Assembly, "it is time to grow in fraternal life and put an end to clericalism and all kinds of abuse. Next, they underline their desire to also listen to the voices that make them uncomfortable and to create spaces and structures that encourage participation, especially of women and young people. "We want to encourage community consultation and discernment, opening ourselves more and more to the participation of the laity and their influence in decision-making".
May the blood of St. Oscar Romero and of the Latin American martyrs, nourish the courage and commitment to justice in the construction of a fraternal continent, hopes the message, which reaffirms the preferential option for the poor, for denouncing everything that hurts their dignity and for being "a poor Church for the poor, rethinking our way of life, our language and our ecclesial structures". The last point of the message is dedicated to the culture of encounter. "A Church capable of dialogue with everyone, without losing our Christian and Catholic identity, building bridges to build an authentic 'brotherhood' among human beings. We encourage a culture of encounter so that, in times of war, our region is a space of peace". The Extraordinary Assembly of CELAM opened with the blessing and inauguration of the new facilities of the CELAM headquarters in Bogota (see Fides, 13/7/2022). The agenda included some especially relevant ecclesial issues on which the participants reflected and debated: the Ecclesial Assembly, held in November 2021, the subsequent meetings of the regions held in the first quarter of 2022, and future prospects ; the pastoral journey of the Church on the continent with a view to the Guadalupan Jubilee and the Jubilee of the Redemption; the synodal path; the Apostolic Constitution Praedicate Evangelium on the service of the Roman Curia. (SL) (Agenzia Fides, 15/7/2022)

AMERICA/COLOMBIA - Inauguration of the new CELAM headquarters, intended "to work and serve the evangelization of all the peoples of Latin America and the Caribbean"

AMERICA - The Bishops after the massacres of Melilla and San Antonio: the hardening of migration policies is ineffective, we must expand the possibilities of regular migration