AMERICA/COLOMBIA - Inauguration of the new CELAM headquarters, intended "to work and serve the evangelization of all the peoples of Latin America and the Caribbean" 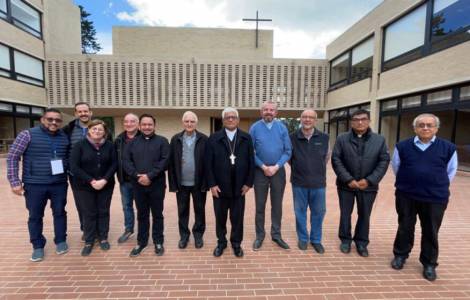 2022-10-03
Mining, with respect for Creation and human rights, builds progress and development not only economic

2022-09-10
The testimony of Monsignor Jaramillo, "prophet and martyr of peace" is always alive and current

2022-09-03
Week for Peace: at the center the territories which experience conflicts but also hope

2022-08-02
Faced with the escalation of violence in Apartadó: prayers for peace and reconciliation, symbolic acts of rejection

2022-07-28
Bishops stand in solidarity with police after attacks and killings: "Every fallen policeman is a brother"

Bogota (Agenzia Fides) - "While I invite you to thank God for the happy conclusion of this material work, which can be of help in the realization of projects of evangelization and pastoral formation in support of the Episcopal Conferences, it is appropriate to remember that 'Unless the Lord builds the house, the builders labor in vain' (Ps 127:1)". This is what the Holy Father Francis writes in the Letter he sent to the President of the Latin American Episcopal Council (CELAM), His Exc. Msgr. Héctor Miguel Cabrejos Vidarte, O.F.M., Archbishop of Trujillo, on the occasion of the inauguration of the new CELAM headquarters in Colombia, in Bogota, on July 12.
Pope Francis recalls that, as a community of disciples, "we feel the perennial need to ask the risen Lord to promote and strengthen our ecclesial mission with the power of his Holy Spirit in order to be ready to discern the signs of the times" and invites us not to forget that "our material structures have meaning only when they are destined to serve above all the sisters and brothers who live in the most extreme peripheries of life". On July 12, in the course of an Extraordinary Assembly of Celam which takes place until July 14, in which the Presidents and Secretaries of the 22 Episcopal Conferences of the continent participate, in addition to the representatives of various ecclesial organizations and the Holy See, the new structures of the Celam headquarters in Bogota were blessed and inaugurated. The event was chaired by the Celam Board of Directors: Monsignor Miguel Cabrejos, President; Monsignor Jorge Lozano, Secretary General; Cardinal Odilo Scherer, First Vice President; Cardinal Leopoldo Brenes, Second Vice-President; Monsignor Rogelio Cabrera, president of economic affairs.
Monsignor Cabrejos explained that the new headquarters will be destined "for work and service in favor of the evangelization of all the peoples of our Latin America and the Caribbean and at the service of the Holy People of God, especially the poorest and most vulnerable of our beloved Latin America".
During the Eucharistic concelebration for the inauguration of the new headquarters, presided over by Monsignor Miguel Cabrejos, and concelebrated by Cardinal Michael Czerny, Prefect of the Dicastery for Integral Human Development, and by Cardinal Pedro Barreto, President of the Ecclesial Conference of the Amazon (Ceama), Monsignor Cabrejos recalled: "we need a conversion to the synodal experience, which requires the will of all to strengthen the culture of dialogue, mutual listening, spiritual discernment, consent and communion in order to find spaces and ways of common decision, as narrated in the Acts of the Apostles". Likewise, Monsignor Cabrejos stressed that "synodal conversion implies the understanding that synodality is expressed in the dynamic circularity of the consent of the faithful, of episcopal collegiality and of the primacy of the Bishop of Rome". To this end, "the Church is called to listen to all those who together form the People of God". (SL) (Agenzia Fides, 13/7/2022)

AMERICA - CELAM's message: "It is time to go out, to walk together, it is time for martyrdom and encounter with everyone"

AMERICA - The Bishops after the massacres of Melilla and San Antonio: the hardening of migration policies is ineffective, we must expand the possibilities of regular migration