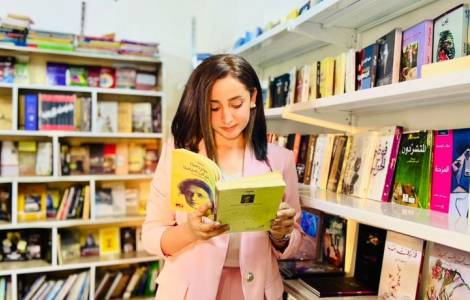 Mosul (Agenzia Fides) - In Mosul and in the Nineveh Plain, the network of libraries and bookshops has paid a high price due to the jihadist occupation and the military interventions that have devastated it. In those years, from 2014 to 2017, many bookstores were forcibly closed, libraries of historical value were destroyed, and collections of ancient books and manuscripts were taken away to save them from looting and devastation. Now, among the signs of the "new beginning" of social and community life in that region of Iraq is also the reopening of libraries, book stores and cultural centers. A phenomenon that involves in a unique way some young people belonging to the indigenous Christian communities.
In the village of Sirishka, in the district of Alqosh, north-east of Mosul, Iraq, the interest and involvement of the local population is growing around the initiative of Janan Shaker Elias (in the photo), a young woman who opened to the public a private library which soon became a center for cultural meetings and exchanges. Today, the site offers almost 2,000 free reference volumes (a number that is slowly but steadily increasing), divided by genres and disciplines, and also functions as a reservation center for books for purchase. The idea of opening a bookstore - as Janan herself has explained in the local media - had been in the young woman's mind for a long time, and even before the last conflict she was forced to order books online and expect long delivery times. This intention became even stronger when Janan and her family were forced to leave her village threatened by the advance of the jihadists of the Islamic State (Daesh). Back in Sirishka, and after finishing her university studies, Janan has finally been able to make her dream come true, with which she hopes to contribute to the recomposition of the social, cultural and community fabric torn apart by conflicts and sectarian impulses. The concern of young Christians about the role that libraries and bookshops play in the resumption of civil coexistence in the Iraqi region that has remained for years under jihadist occupation also surfaced at the end of June at the Faculty of Humanities of the University in Mosul, where several people attended the discussion of student Sanbla Aziz Shihab's dissertation on the subject of library destruction and its negative impact on community peace in Iraq. In her research, the graduate student focused on the destruction of Christian libraries in Mosul and the cities of the Nineveh Plain during the years of the recent jihadist occupation. Last February, the reopening of the Mosul University Library, rebuilt after the devastation suffered during the military offensives against the Daesh occupiers, was presented by the international media as an objective sign of the "new beginning" of the metropolis of northern Iraq, after years of massacres, bombings and mass escapes. (GV) (Agenzia Fides, 7/7/2022)

EUROPE/RUSSIA - The religious who helped the hungry: one hundred years after the pontifical mission sent by Pope Pius XI

AFRICA/MOZAMBIQUE - The Bishop of Pemba: "In order to stop Jihadists, we must give young people a future"