AFRICA/NIGERIA - Another priest kidnapped; alarm after the attack on a prison near Abuja 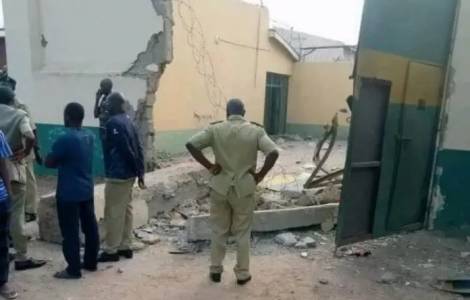 2022-09-21
Bishop of Orlu: "The military assault on the market of Eke Ututu risks alienating the support of the State from the population"

2022-09-12
President of the Bishops' Conference: "We are passing through the darkest chapter of our history"

2022-09-06
Kidnappings and murders: Bishop of Abakaliki complains about lack of security

Abuja (Agenzia Fides) - Fr. Peter Amodu, a priest of the Congregation of the Holy Spirit (Spiritans) was kidnapped on his way to celebrate mass. This was announced by the Diocese of Otukpo, in the State of Benue (north-central Nigeria) in a statement sent to Agenzia Fides The kidnapping took place on July 6 around 5:00 p.m. on the Otukpo-Ugbokolo road while the Spiritan father was on his way to celebrate mass in Okwungaga-Ugbokolo.
Fr. Amodu, who serves at the Church of the Holy Spirit in Eke-Olengbeche, is just the latest of the priests who have been victims of kidnapping or attempted kidnapping in recent days in different parts of Nigeria. Among them is an Italian missionary. Luigi Brena, a 64-year-old Somascan missionary (regular Somascan clerics), who contrary to what was previously reported was not released by the police (see Fides, 5/7/2022) but as explained by Fr. J. Antonio Nieto Sepúlveda, Vicar General of the Somascan Fathers, who spoke with Father Brena and the two Nigerian religious who live in the same community by telephone “the father defended himself from the kidnapping by holding on to a railing. So the kidnappers started shooting. Then they beat him and wounded him with a knife: they cut off half of his ear, for which he was hospitalized. Police said they intervened immediately and released him. But it is not true, the police arrived much later”. Meanwhile, three other kidnapped priests have been released. Fr. Emmanuel Silas, kidnapped on July 4 in Zambina, in the northeastern state of Kaduna (see Fides, 5/7/2022), as well as Fr. Peter Udo, from the parish of St. Patrick Uromi, and Fr. Philemon Oboh, from the Saint Joseph Retreat Center, in Ugboha, in the local government area of Esan, in the state of Edo, in southern Nigeria, kidnapped on July 2 (see Fides, 4/7/2022). The security situation in Nigeria appears increasingly precarious in light of yesterday's clamorous assault on Kuje prison, outside the federal capital, Abuja, which resulted in the release of about 440 inmates. The assault was claimed by the local branch of the Islamic State (Islamic State in West Africa Province ISWAP). Out of a total of 879 inmates who have fled, the prison service said in a statement, 443 remain at large. Four inmates were killed in the raid and 16 others were injured. Hours before the Kuje prison attack, gunmen also ambushed a detachment of President Muhammadu Buhari's security officers, who was not in the convoy, near his hometown in Katsina State. (L.M.) (Agenzia Fides, 7/7/2022)

AFRICA/MOZAMBIQUE - The Bishop of Pemba: "In order to stop Jihadists, we must give young people a future"