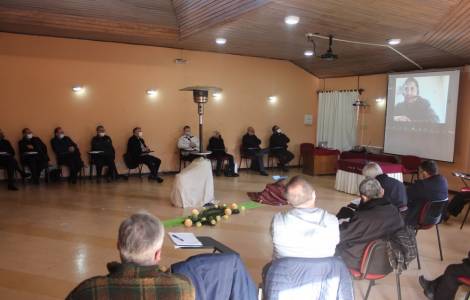 2022-09-07
After the referendum a great social pact is needed, listening to each other and leaving polarization behind

2022-09-02
Plebiscite of September 4: the concrete contribution of religious life to the construction of fraternity in a polarized society

2022-08-30
Love for God, one's neighbor and country: on September 4 the Chileans called to a "historical decision for the future"

La Serena (Agenzia Fides) - The priests involved in the pastoral service of the ecclesial communities of the provinces of Elqui and Limarí, of the Chilean Archdiocese of La Serena, met on July 5, in the retreat house "El Tránsito", to reflect on the vocational situation. According to the note from the Archdiocese, the objective was to become aware of the lack of vocations, especially for the Church of La Serena, and to commit to promoting vocational paths for young people in the area, considering that it is one of the priorities of the Archdiocesan Pastoral Guidelines.
During the day they participated in three videoconferences, the first of which was entrusted to the sociologist and professor of the Catholic University of the North, Sergio Murga, who referred to the relationship of young people with the Church and institutions in general.
"The young people I interviewed put a barrier towards me, a sort of distance from the Church. The dogmatism with which they hear priests and ecclesiastical authorities express themselves causes a kind of social distancing that prevents this age group from getting closer. Speaking with a certain authority about the 'absolute truth' in today's reality distances them from the discourse inspired by biblical texts", said the speaker. In addition, he stressed that the aspects to be taken into account for youth ministry should promote "an approach with two eyes, two ears and one mouth: that is, listen and look, before speaking. When I try to impose my point of view, I become dogmatic. We have to break down the barriers and ask ourselves: what do today's young people, the elderly, immigrants, women need? Also present at the meeting were priests Andrés Valenzuela, rector of the 'San Rafael' Pontifical Major Seminary in Valparaíso, and Alberto Zambrana, former rector of the 'Santo Cura de Ars' Major Seminary in La Serena, currently a formator at the priestly formation house.
Both addressed the general vision of the Seminaries in Chile and the challenges that arise through this reality. Vocations in the country "have been affected for several years, due to the situations we are experiencing as a country and also as a Church. This has reduced admissions to our seminaries and also leads us to reflect on how we can provide the right tools today, so that young people can wonder about their possible vocational call to consecrated life." The need was also highlighted "not to think only of them, but also of families, which implies paying attention to children, adolescents, youth and young adults, who can then be at the service of parishes as catechists, committed lay people or future priests and religious". The Archdiocese of La Serena has a population of 691,000 inhabitants, of which 421,000 are Catholics, 34 parishes, 34 diocesan priests and 25 religious, 65 permanent deacons, 8 major seminarians. (SL) (Agenzia Fides, 7/7/2022)

AMERICA/BRAZIL - Vocation Month begins, looking to the next Vocation Year on the theme "Vocation: grace and mission"