VATICAN - Pope Francis: mission is born from astonishment and not from the skills of 'experts' 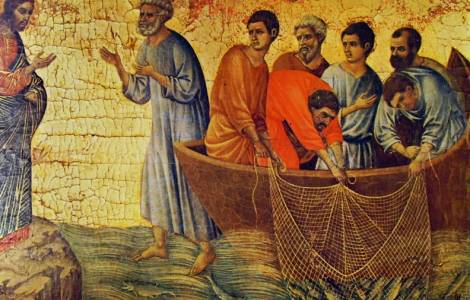 2022-09-19
Artist Zhang: to paint Blessed Pope Luciani, I sought inspiration from the Bible and the cross

2022-09-16
Pope Francis: in the face of de-Christianization, Saint Augustine is more useful than "modernization" plans

2022-09-09
Mgr. Harrington to the Bishops: "We need to rethink communication, putting the recipients of the message at the center"

Rome (Agenzia Fides) - The task of the Church in history is "to go on mission, to bring proclamation, to let it be known that Jesus came from the Father". This work is not the business of experts, it does not rely on professional skills handled by "specialists". It is released freely in those who experience "this closeness to God in Jesus, this closeness to God who is Jesus, is the source of our joy" which "amazes, surprises, changes lives". And it is not based on material means and worldly strategies, but on the action of the Holy Spirit, who works effectively through hearts "free and simple, small and humble". Pope Francis therefore once again suggested the source and the distinctive features of the apostolic mission entrusted by Jesus to his disciples. He did so in the homily for the Mass celebrated in St. Peter's Basilica on Sunday July 3, the day the Pontiff himself should have been in Kinshasa, according to the program of the announced apostolic visit to the Democratic Republic of Congo and South Sudan, later postponed for health reasons. The Eucharistic liturgy in Saint Peter's Basilica, celebrated according to the Zairian rite, saw the participation of priests, men and women religious and lay people from the Congolese community in Rome. In his homily, the Bishop of Rome took as a starting point the passage from the Gospel of Luke read during the liturgy, which recounts the gestures and words with which Jesus designates 72 disciples and sends them "two by two ahead of him, in every city or place where he was about to come". "If we ask ourselves what our task in the world is, what should we do as a Church in history", the Pope began in his missionary reflection "the answer of the Gospel is clear: mission. Going on a mission, bringing the proclamation, making it known that Jesus came from the Father". The possibility of embracing such a task, continued the Pontiff, is not primarily a question of competence or preparation: in the Gospel itself, Jesus sends his disciples "without waiting for them to be ready and well trained: they had not been with Him for a long time, and yet He sends them. They hadn't studied theology, and yet he sends them". And he sends them, inviting them not to carry bags, messenger bags, or sandals. "Practically nothing: no luggage, no security, no help", remarked Pope Francis in his homily. "We often think that our ecclesial initiatives do not work properly because we lack structures, we lack money, we lack means: this is not true. The denial comes from Jesus himself. Brothers, sisters, do not trust wealth and do not fear our material and human poverty. The more we are free and simple, small and humble, the more the Holy Spirit guides the mission", continues the Successor of Peter. The only inexhaustible source from which authentic apostolic work can emanate is the "special joy" aroused by the encounter with Christ". Only such an encounter, and not participation in preparation and formation courses, provokes a change: it fills with astonishment, it surprises, it changes life." "And the encounter with the Lord, continued the Pontiff, is a perpetual beginning, a perpetual step forward. The Lord always changes our life. This is what happens to the disciples in the Gospel: to announce the closeness of God, they go far, they go on mission." "For whoever welcomes Jesus feels that he must imitate him, do as he did; he left heaven to serve us on earth", added Pope Francis. An adventure that does not require any particular "equipment", but only a fraternal communion with those who benefited from the same gift. "He sent them two by two", says the Gospel of Luke at the center of the Pope's reflection. This is why, noted the Sovereign Pontiff, those who bear the name of Christ move "not alone, not isolated, but always with their brother at their side". Never without the brother, because there is no mission without communion". And the message that Christ himself asks to be carried to the four corners of the world is simple and direct. It is not a question of "studying the contents thoroughly, preparing convincing and well-articulated speeches". In each house they enter, the disciples sent by Christ will only have to say "Peace to this house!", and announce that "the kingdom of God is very near". "To announce the nearness of God" the Pope remarked "is his style; God's style is clear: closeness, compassion and tenderness. This is God's style. Announcing the closeness of God, that is the essential". And the disciples are called to do this by going into the world "like lambs among wolves", which "does not mean being naive", commented Pope Francis, "but to abhor every instinct of supremacy and domination, of greed and possession." He who lives like a lamb, continued the bishop of Rome, does not attack, is not voracious: he remains in the herd, with others, and finds security in his shepherd, not in force nor in arrogance, not in greed for money and goods which also cause so much harm to the Democratic Republic of Congo". (GV) (Agenzia Fides, 4/7/2022)