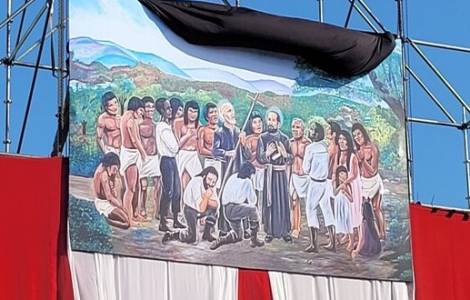 2022-09-27
Towards the pilgrimage to Luján: “Let us learn from the pilgrims to continue building the common good”

Nueva Oran (Agenzia Fides) - "Yesterday, in San Ramón de la Nueva Orán, Argentina, Pedro Ortiz de Zárate, a diocesan priest, and Govanni Antonio Solinas, a priest of the Society of Jesus, were beatified - the Holy Father Francis recalled at the end of the Angelus on Sunday, July 3 -. These two missionaries, who dedicated their lives to transmitting the faith and defending indigenous peoples, were assassinated in 1683 for carrying the Gospel message of peace. May the example of these martyrs help us bear witness to the Good News without compromise, dedicating ourselves generously to the service of the weakest. A round of applause for the new blesseds!".
On Saturday, July 2, in the Family Park of the city of San Ramón de la Nueva Orán, the Eucharistic Celebration of the Beatification of the two martyrs took place (see Fides, 15/10/2021; 3/1/2022; 1/7/2022), presided over by the Prefect of the Congregation for the Causes of Saints, Cardinal Marcello Semeraro. Numerous Bishops concelebrated with him, including Cardinal Mario Aurelio Poli, Archbishop of Buenos Aires; Msgr. Miroslaw Adamczyke, Apostolic Nuncio; Msgr. Oscar Vicente Ojea, President of the Argentine Bishops' Conference; Msgr. Luis Antonio Scozzina, Bishop of Nueva Oran. A large number of faithful, men and women religious, were also present, in addition to representatives of the Jesuits and of Italy. "Recalling the martyrdom of the blessed martyrs Pedro Ortiz de Zárate and Juan Antonio Solinas: we celebrate the blossoming, the springtime of the Church", underlined Cardinal Semeraro in his homily, citing the expressions of the Fathers of the Church on the meaning of martyrdom in the light of faith, which is therefore considered the "seed" of new Christians.
"The martyrdom of our two Blesseds is well known to us: both were ministers of the first evangelization" said the Cardinal, recalling Blessed Pedro, a native of Argentina, "who was a man for all times, that is, a witness of Christ in many states of life". A witness described him as "a good politician, a good husband and father, and later an excellent priest, who knew the Indians well and defended them, baptized them and treated them like Christians". Blessed Giovanni Antonio was an Italian, a Jesuit, and immediately after his priestly ordination, he arrived in mission lands. The testimonies highlighted his generous dedication to the spiritual and material needs of the Indians, as well as the pastoral care in favor of the Spaniards, who lived in those lands. "It was the missionary impulse that led them to a mutual encounter. Together they put themselves at the service of the Gospel and were faithful to the point of bloodshed", the Cardinal underlined. The Prefect of the Congregation for the Causes of Saints then focused on the link that exists between martyrdom and the Eucharist: "It is from the Eucharist, in fact, that the strength to be Christians is born, to continue being Christians, to live as Christians. If today there is a weak and fluid Christianity, and also a situation in which there is shame in showing oneself as a Christian, and also, paradoxically the opposite, where there is calculation and interest in declaring oneself as such, if for many faith is reduced to a “thing” that is easily lost, the reason is far from the Eucharist". On Friday, July 1, Monsignor Marcelo Colombo, Archbishop of Mendoza and Vice President of the Argentine Episcopate, presided over the celebration of the Vigil Mass, on the way to the beatification of the Martyrs of Zenta. "Seeking to serve the aboriginal brothers in an authentically evangelical way, with the meekness of the good shepherd, without violence of any kind that obscured the truth that they witnessed, they were joined by the crown of martyrdom, to be united forever with that of Christ", he said in the homily, pointing out how these two apostles tried to make Christ and his Church known "to those who did not know the Lord, to make them part of that new family. To invite in the name of Christ was undoubtedly the intention that permeated the mission of Fathers Ortiz de Zárate and Solinas in their missionary option". (SL) (Agenzia Fides, 4/7/2022)

AMERICA/ECUADOR - The point on dialogue envisaged by the peace agreements: "it is the only way to resolve the great conflicts and the historical demands of all"