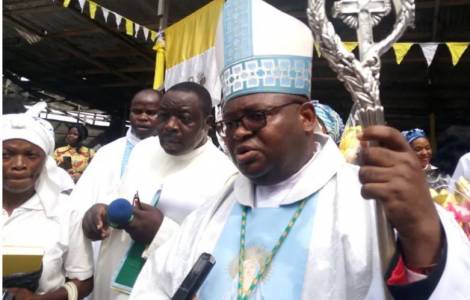 2022-07-21
A Baptist Pastor: "religious ommunities are more united than ever"

2022-07-13
The new PMS Director: "A Church of proximity that announces and lives peace"

2022-07-11
"Proclaim the Gospel with works of charity": the Orionine missionaries ready to inaugurate a new community

Buea (Agenzia Fides) - "The greatest challenge the Church faces in our lands is to lead a pastoral life among a people who live in fear. The life of our people has no semblance of normality, many families are forced to flee for fear of losing their lives. But throughout the region, our priests have remained close to the people: we have never closed any church, we try to give confidence by remaining faithful to God and to the Church , without abandoning anyone. Above all, we look to God as our hope. As Bishop, I make pastoral visits every year to every community in my diocese, even to those where it is more dangerous to go forward". Speaking to Fides, Msgr. Michael Miabesue Bibi, Bishop of Buea, the second largest city and the second most populated (about 700,000 inhabitants) of the English-speaking regions of Cameroon. The city is undoubtedly more livable and less dangerous than Bamenda, the regional capital, but in its peripheral areas, as one moves away from the center, as well as in the forest areas, the situation remains very tense and characterized by clashes between the army and armed pro-independence groups. "Before, the inhabitants of Buea were more afraid of the soldiers and their incursions into the villages; now they are more afraid of the Amba Boys (the separatist armed groups), and when I meet the faithful in the most remote areas of the diocese, they tell me: it is better for us that they send the army because the Amba Boys are more dangerous", underlines the bishop. In the past, he continues, there was more solidarity with the separatists and the government accused everyone of collaborating with them. But lately, the Amba Boys have committed heinous acts and the population is afraid. In a village I will visit shortly, many civilians were beaten and threatened simply because they complained about the situation in which they lived. In many internal areas, the Amba Boys have forced schools to close because they are run by the government. In some cases, they do not allow humanitarian aid to pass and leave the population in total isolation. In the region, life is marked by displacement and hardship: "In Limbe, reports Bishop Miabesue Bibi, a town very close to Buea with an outlet to the sea in Amba Bay, which is part of the diocese of Buea , many displaced people are arriving from Mamfe, Bamenda, Kumbo and we are trying to help everyone. My diocese has been much more populated lately because it is calmer, but anything can happen on the outskirts: there are still frequent shootings which terrorize the innocent population, forcing them to flee. Unfortunately, we are not entirely peaceful here in the city either, and sometimes we hear explosions and gunshots. We have been living in this situation for too long, but we must be hopeful because we know that God does not abandon us. My prayers and hopes and of all the People of God have only one goal: that soon an agreement can be reached and that peace can be given a chance. Too much suffering has gripped us for too long: we must return to a normal life, hospitals and schools cannot be closed or destroyed. In some areas, such as Muyuka, most schools are closed. We can no longer allow people to live like this". (LA) (Agenzia Fides, 28/6/2022)

ASIA/PAKISTAN - The appeal of civil society to the government: Do not teach hatred towards minorities at school