AMERICA/HAITI - An Italian missionary who had dedicated herself to street children for 20 years murdered: the long trail of blood of the Church 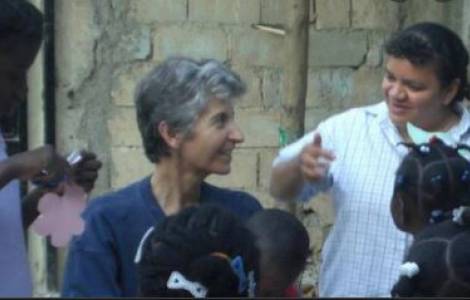 Rome (Agenzia Fides) - "I would like to express my closeness to the relatives and fellow sisters of Sister Luisa Dell’Orto, a Little Sister of the Gospel of Saint Charles de Foucauld, who was killed yesterday in Port-au-Prince, the capital of Haiti. For twenty years, Sister Luisa lived there, dedicated above all to serving children on the streets. I entrust her soul to God, and I pray for the Haitian people, especially for the least, so they might have a more serene future, without misery and without violence. Sister Luisa made a gift of her life to others even to martyrdom". This is how the Holy Father Francis recalled at the Angelus on Sunday, June 26, the murder of the nun, who was most likely the victim of an attempted robbery. The Archdiocese of Milan, where she was from, stressed that Sister Luisa was the backbone of Kay Chal, "Casa Carlo", located in a very poor suburb of Port-au-Prince. She dedicated 20 years of her life and her mission to providing a safe and welcoming place for hundreds of children. On the morning of Saturday, June 25, she was the victim of an armed attack. Seriously injured, she was taken to hospital, where she died shortly after, two days before her 65th birthday. The news has had a great impact in Port-au-Prince, where "seur Luisa", as they called her, was an institution. Sister Luisa was born in Lomagna (Lecco) on June 27, 1957. After attending the Lecco Scientific High School, she graduated in History and Philosophy in 1984. That same year she entered the Congregation of the Little Sisters of the Gospel of Lyon. In 1987 she went to Cameroon: she lived in Salapombe, in a forest, among the Baka pygmies, until 1990. In the meantime, a Missionary Group was created in Lomagna to support this population. In 1994 she received a licentiate in Theology in Switzerland. From 1997 to 2001 she was a missionary in Madagascar, where she devoted herself to various pastoral activities, teaching General and Special Ethics. Since 2002 she was a missionary in Haiti. She also taught History of Philosophy and Social Doctrine of the Church and was part of the Editorial Board of a local magazine. In his message of condolences, the Archbishop of Milan, Mario Delpini, underlines, among other things: "The death of Sister Luisa Dell'Orto leaves us heartbroken and disconcerted, it becomes a revelation of the good she did and of the holy life she lived, it becomes pain and prayer. On behalf of the Ambrosian Church, I express my participation in the mourning of her family, in the grateful and sorrowful memory of all those who knew her, and in the certainty that her death, so similar to that of Charles de Foucauld, united to the death of Jesus, may be a seed of new life for the land of Haiti and for its entry into glory".
The bishops of Haiti have long made appeals and reminders about the difficult crisis that the country is going through at all levels. Violence and corruption are rampant, the population sinks deeper and deeper into poverty and is exhausted. The natural disasters that frequently hit the island and the Covid-19 pandemic contribute to this situation, as does the political instability, which saw the assassination of the President of the Republic Jovenel Moïse a year ago (see Fides, 8/7/2021).
In their 2021 Christmas message, the bishops had written: "We cannot remain indifferent to the tragic events of recent months", launching a new appeal to the international community and local politicians to find solutions to the institutional, economic and social chaos that has been hitting the country for years now. The Bishops also shared the pain of those who are victims of kidnapping, rape and violence of all kinds, entrusting to God's mercy the souls of innocents fallen under the blows of armed groups (see Fides, 21/12/2021). The kidnapping industry is flourishing on the island and armed gangs rule everywhere with total impunity, in search of easy money, not sparing priests and nuns, who, despite being tried by the situation, do not abandon the Haitian people. On Sunday, April 11, 2021, in the town of Croix-des-Bouquets, 5 priests, 2 nuns and 3 relatives of one of the priests were kidnapped (see Fides, 12/4/2021). On September 6, 2021, in Cap-Haïtien, Father André Sylvestre, a 70-year-old priest, was attacked as he was leaving a bank. Wounded by a group of criminals, he died in the operating room. In addition to his parish, he ran an orphanage and helped the homeless (see Fides, 8/9/2021).
Sister Isa Solá Matas, of the Religious of Jesus-Maria (RJM), originally from Barcelona (Spain), was murdered on the morning of September 2, 2016, while driving her car during a probable robbery attempt, since her purse and other personal belongings were stolen. The nun was very committed to the humblest and poorest people in Haiti, with whom she had practically lived since the 2010 earthquake. On April 24, 2013, Father Richard E. Joyal, a Canadian from the Society of Mary, was murdered in Port-au-Prince to steal the money he had just withdrawn from the bank (see Fides, 26/4/2013) and on October 8, 2010, Julien Kénord, a worker for Caritas Switzerland, was murdered, also in Port-au-Prince, after an attempted (see Fides, 3/9/2016). (SL) (Agenzia Fides, 27/6/2022)