EUROPE/RUSSIA - The religious who helped the hungry: one hundred years after the pontifical mission sent by Pope Pius XI 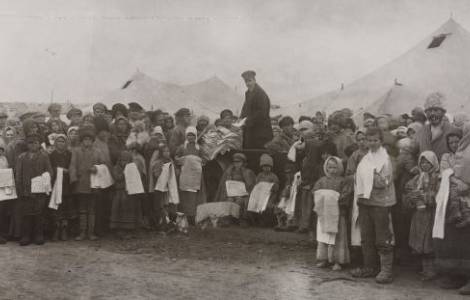 Moscow (Agenzi Fides) - "This story shows how, if we trust in God, we too can carry out the mission that He has entrusted to us", declared Father Stephan Lipke SJ, during the presentation of the book in Russian on the mission pontifical aid to the hungry in Russia (1922-1924), sent by Pope Pius XI, whose centenary is celebrated this year. A few days ago, at the "Knižnaja Palata" Orthodox Cultural Center in Moscow, the Jesuit, director of the Saint Thomas Institute in Moscow, and the author of the book, Maria Chiara Dommarco, held a meeting to begin to introduce the Russian-speaking public the history of the pontifical mission, before some thirty Orthodox and Catholics. The Apostolic Nuncio in Russia and Uzbekistan, Monsignor Giovanni d'Aniello, hailed the publication with joy. The aftermath of the Bolshevik revolution and civil war added to the famine of the summer of 1921 and subsequent epidemics, threatening the implosion of the newborn Soviet state. Pius XI's concern did not stop trying to carry out what Benedict XV was already expecting: a rescue mission of the Holy See, financed by everyone who in every corner of the earth was not oblivious to the tragedy that was taking place.
On March 12, 1922, Cardinal Gasparri and the plenipotentiary of the Bolshevik government, Vaclav Vorovsky, signed the agreement that would allow twelve Catholic religious to leave for the territories recently in the hands of the Leninist government and help the Russian population. Thus, in the summer of 1922, the religious arrived in Russia and the mission was deployed in the designated points: Moscow, Krasnodar, Yevpatoria, Džankoj, Rostov and Orenburg. The humanitarian nature of the expedition, which, according to what was agreed with the Soviet government, was not to have religious purposes, had multiple implications, both on a human and a diplomatic level. Dr. Maria Chiara Dommarco dealt with its history and its implications, publishing in December 2020 (co-edited by La Casa di Matriona, Seriate - Istituto San Tommaso, Moscow) a monograph in Italian that is the first proposed with the objective of scientifically reconstructing its history, based on the analysis of a considerable number of documents - almost all archival sources available on the subject. In the two years that their mission lasted, Pius XI's envoys not only fed thousands of needy people and provided them with medicine daily, but also dedicated themselves to searching for those who had disappeared due to the First World War, the civil war that broke out after the Bolshevik revolution and the persecution of Catholics and Orthodox, without ever making distinctions based on the religious or political affiliation of those they encountered. On the contrary, their stay in Russia was an opportunity for many of them to discover the beauty of the Eastern rite, to meet the Orthodox and Catholic communities of the Byzantine rite, and to establish relations with the local clergy and faithful based on the mutual affection and esteem. In addition, thanks to the presence of the envoys there, the Holy See received first-hand information on the state of religious persecution (in particular, on the trial of the Catholic clergy in 1923) and the director of the mission, Father Edmund Walsh SJ, was able to make many believers feel the Pope's closeness in a concrete way, as in the case of Archbishop Cieplak, imprisoned in Moscow. It was "an ecumenism of charity ante litteram", a clear example of how external conditions, however tragic, do not by themselves deny the possibility of making room for gestures of closeness towards those with whom one meets, even once in a lifetime. Once the acute phase of the emergency was over, although misery was still widespread, the expedition was liquidated by the Leninist government. The Holy See's hopes of being able to establish a permanent mission in the form of vocational schools or similar institutions, which would have lifted many young people off the street, were disappointing. On the other hand, as "L'Osservatore Romano" reported on June 28, 1923, Pius XI had been clear: not the persecutions against Catholics (the execution of Monsignor Budkiewicz had just taken place), but only the refusal of the Soviet government would cause the cessation of the relief activities of the pontifical envoys. Reconstructing the events of the pontifical mission in Russia was a necessary step to shed light on a page of history that would otherwise be little known: now Russian-language readers will also be able to face it, thanks to the second edition of the monograph, corrected and expanded, published by the San Tommaso Institute.
The centenary shows how hatred and violence are never the only options in the field: dialogue and charity, on the other hand, are always paths that are not only viable, but history indicates they are necessary for reconciliation between men. (CD/PA) (Agenzia Fides, 25/6/2022)