ASIA/INDIA - Prayer to St. Devasahayam and consecration of families to the Sacred Heart of Jesus 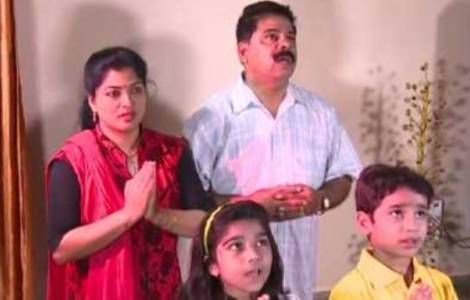 2022-08-04
The work of the Jesuit Catholic network: Pastoral care and care for migrants

Kottar (Agenzia Fides) - The Catholic Church of the Latin rite in India will hold a National Thanksgiving Prayer Service next June 24, the solemnity of the Sacred Heart of Jesus, to pay tribute to St. Lazaro Devasahayam Pillai, the first lay Catholic saint of India, canonized in the Vatican on May 15, and to consecrate all Indian families to the Sacred Heart of Jesus.
The prayer, which will last from 8.30 am to 9.30 pm, will be held on the tomb of St. Devasahayam at St. Francis Xavier’s Cathedral, Kottar, in southern Indian state of Tamil Nadu, and will be led by Msgr. George Antonysamy, Archbishop of Madras-Mylapore, Vice President of the Bishops' Conference of the Latin Rite in India (CCBI). Archbishop Anil Joseph Couto of Delhi, secretary general of CCBI, Bishop Nazarene Soosai of Kottar, and Sister Annie Kuttikadu, SMI will lead the chanting of the psalms Father John Kulandai, vice postulator for the canonization of St. Devasahayam, will proclaim the Gospel while Cardinal Oswald Gracias of Bombay will give the homily.
The prayer to St Devasahayam will be recited by Archbishop Thomas J. Netto of Trivandrum while the choir will sing the litany of saints, invoking the saint's intercession.
Father Yesu Karunanidhi, executive secretary to the CCBI Commission for Bible, along with seven lay faithful from different parts of India will lead the prayers of the faithful in Hindi, Tamil, Malayalam, Kannada, Telugu, Bengali, and Badga.
Cardinal-elect Filipe Neri Ferrão, CCBI president and Archbishop of Goa and Daman, will consecrate all families to the Sacred Heart of Jesus.
Archbishop Antony Pappusamy of Madurai will recite the concluding prayer and the Apostolic Nuncio to India and Nepal, Archbishop Leopoldo Girelli, will give the Eucharistic Blessing.
The Bishops requested everyone, particularly families and religious communities, to join in the prayer service and shared the event to family and community members abroad, so that they too can to unite, in spiritual communion, as one family. "May all Catholics in India - they exhort - spend this day as one family, thus bearing witness to the unity and universality and cultural and linguistic diversity of the Church".
As reported in a note sent to Fides by Father Stephen Alathara, deputy secretary general of the CCBI, the day will be broadcast on various Catholic satellite TV channels such as Madha TV, Shalom TV, Goodness TV, Divyavani TV, Atmadarshan TV, Ishvani TV, CCR TV and Prarthana Bhawan TV. It will also be possible to follow the event in streaming through the main Catholic YouTube channels.
The Catholic Church of the Latin rite in India has 132 dioceses and 18 million faithful. Lazaro (called Devasahayam) Pillai, born Neelakanta (Nattalam, April 23, 1712 - Aralvaimozhi, January 14, 1752), was an Indian officer at the court of the king of Travancore. He was murdered by a group of soldiers due to his conversion to Christianity. (SD/PA) (Agenzia Fides, 21/6/2022)

AMERICA/PANAMA - Bishops’ appeal: "All committed to strengthening the unity and stability of the family, so that it can fulfill its mission"