AMERICA/CHILE - More than 80,000 euros collected for humanitarian aid for the Ukrainian people 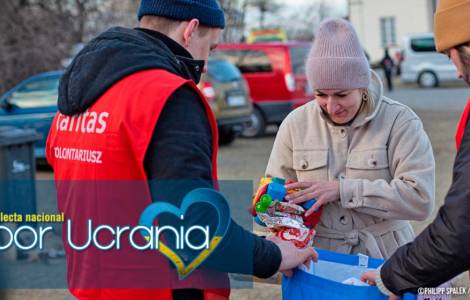 Santiago (Agenzia Fides) - Caritas Chile has announced the result of the national collection for Ukraine, promoted by the Chilean Church, which was launched on April 24, Sunday of Divine Mercy, and which since then has received the support of thousands of people across the country. To date, it has been possible to collect a total of 75,800,276 pesos, equivalent to €81,400, which will be allocated to a humanitarian aid project for war victims, implemented by Caritas Ukraine . The objective of this project is to help meet the needs of 65,700 people displaced by the armed conflict, so that they can live in dignity, by offering them short and long-term shelter, covering basic needs ( food, water, hygiene, medicines) and psychosocial support. "The conflict continues to challenge us, underlines Caritas Chile in the press release sent to Fides, because 100 days after the Russian invasion in Ukraine, the situation remains heartbreaking, especially because of the loss of human lives. According to the latest data provided by the World Organization for Immigration, more than 7 million people have been forced to move within the country, while 5 million have been taken in as refugees in neighboring countries (Romania, Poland, Slovakia and Moldova) to avoid the effects of the armed conflict". UNHCR, the UN Refugee Agency, highlighted the support of civil society and volunteer groups, who have shown a high level of solidarity with the people of Ukraine and an extraordinary dedication to support the collective response. As a result, more than 3.4 million people in Ukraine have received humanitarian assistance and protection services. More than 99,000 people received information and protection at border posts. More than one million people are expected to receive assistance, information and protection in the coming weeks. Caritas Chile thanks all those who participated in the collection and invites them to "continue to walk together in our work for the most vulnerable". (SL) (Agenzia Fides, 18/6/2022)

AMERICA/COLOMBIA - The President of Celam: "huge amounts of money for the war instead of investing in combating the causes of the conflicts"