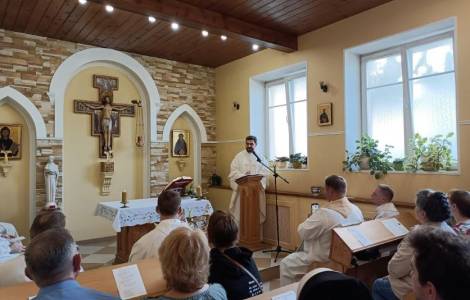 Moscow (Agenzia Fides) - "When he preached, Saint Anthony wanted to share with others his faith in Christ not with iron and fire, but with peace and goodness. Saint Paul said: "Do not let yourself be overcome by evil, but overcome evil with good". This is true in all areas of life. It applies to inner struggles: do not let yourself be defeated by the humiliation you receive, by your bad emotions , but overcome them with good. It applies in each of us and in our relationships with others: let the good win in everything. Do not let hatred win in our hearts and make us live according to its logic. We have no power over our emotions: in themselves they are not a sin, but we are responsible for the actions that flow from them, for the way we behave. We can be conditioned by negative feelings and desires, but it is important to overcome them with good. In this way we will glorify Christ with our life, each according to his vocation". Thus said Father Petros Esajan, Proto-Archimandrite and Vicar of the Archbishop of the Armenian Catholic Church in Russia, during the Mass in honor of Saint Anthony of Padua, celebrated on June 13 at the convent of the Friars Minor Conventual in Moscow, which was attended by around a hundred faithful. Besides the call for meekness and peace, the priest highlighted two aspects of the figure of the saint. "For Saint Anthony, he underlines, he seemed to follow the will of God if he left for the Holy Land and died there as a martyr, but it was not the will of God: it was unconscious pride. Through the path of humility, God prepared him for a life rich in his gifts. You and I, in all likelihood, are not called to perform great miracles or to die as martyrs, but we are certainly called to keep faith in Jesus and to live according to the Gospel, bearing witness to Christ in the world of today". "When Pope Pius XII proclaimed him a Doctor of the Church in 1946, he gave him the title of "Doctor Evangelicum", he recalled, because he testified in a particularly clear way with his life what he preached. While he was meditating on the Gospel in his cell, he was seen talking to the Child Jesus, holding him in his hands. He was talking to the Child, a sign that he had taken the path of humility. And he had come to know Christ in the Gospel. It is certainly this kind of knowledge of Jesus that we can learn from him".
The priest observed that "we can know the true God through the Gospel and the Magisterium of the Church. Christ reveals to us who God really is: it does not depend on feelings or emotions, but on the truth that Jesus showed us with his life and his words. Therefore, knowing and meditating on the Gospel means deepening our knowledge of Christ himself, as Saint Anthony did". Father Petros then recalled that the compass for discovering one's vocation is given by the Church itself, which accompanies the journey of the baptized: "God calls in his ways. We may have different desires, but it is important to understand what God wants. God shows it through the teaching of the Church and sometimes also through the spiritual father. It is very important to understand what comes from ourselves and what comes from God: we must always compare our experience of faith with the experience of the Church. The experience of the Church is greater than our personal experience. We are still children of the Church and everything that concerns us must take place within its framework, nothing outside. At the end of the celebration, which ended with the traditional blessing of children and bread, the party continued in the Franciscan Cultural Center, adjacent to the convent, with refreshments enlivened by traditional Franciscan and Russian songs. The Conventual Minor Friars in Russia and Kazakhstan constitute since 2001 the Russian General Custody of Saint Francis of Assisi ("Rossijskaja General'naja Kustodija sv. Franciska Assijzskogo"). (CD) (Agenzia Fides, 15/6/2022)

ASIA/INDIA - Prayer to St. Devasahayam and consecration of families to the Sacred Heart of Jesus

VATICAN - Pope Francis: mission is born out of gratitude. And the apostles are witnesses, not managers