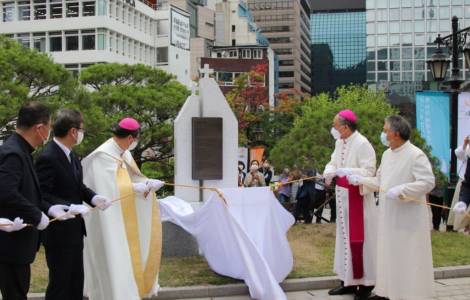 2022-11-19
Resignation and Appointment of Archbishop of Gwangju

2022-10-10
"It is time to take a step forward”: the Forum for Peace calls for a process of dialogue and reconciliation

Seoul (Agenzia Fides) - One hundred years after his birth, we must remember the late Cardinal Stephen Kim Sou-hwan, the first Cardinal in South Korea, "as salt and light for the country, for having guided and strengthened the Church and Korean society": this is what Msgr. Peter Chung Soon-taick, OCD, current Archbishop of Seoul and Apostolic Administrator of Pyongyang said, during the celebration of a commemorative mass to pay homage to Cardinal Stephen Kim (1922-2009).
The memorial mass for the late Cardinal took place at Myeongdong Cathedral, on Pentecost Sunday, in the presence of numerous priests and faithful. The Mass commemorated the Cardinal as "bastion of democracy under a series of military regimes", a figure who - Archbishop Chung emphasized - "is remembered with great respect, while many rumors support his beatification". "I hope that the movement to beatify Cardinal Kim will spread widely among Korean Catholics", added the Archbishop.
After mass, Archbishop Chung participated in a blessing ceremony of the "Stone of Poetry", a special memorial to Cardinal Kim, located at the entrance of Myeongdong Cathedral, on the occasion of the centenary of his birth. Constructed primarily from stone materials excavated during the cathedral's renovations several years ago, the monument is engraved with Francis Jeong Ho-seung's poem entitled "Myeongdong Cathedral" in both Korean and English. Fr. Matthias Hur Young-yup, spokesman for the Archdiocese of Seoul, comments: "The monument is intended to give comfort and strength to all visitors to Myeongdong Cathedral, especially those who are not believers or who are foreigners". In the meantime, a series of cultural events in honor of Cardinal Kim is planned in Seoul, which will begin in July.
Born in 1922 in Daegu, Stephen Kim was ordained a priest in 1951 during the Korean War. He was Archbishop of Seoul for 30 years (1968-1998) and also Apostolic Administrator of Pyongyang for 23 years (1975-1998). Pope Paul VI elevated him to the rank of Cardinal in April 1969.
Cardinal Kim worked wholeheartedly to implement the spirit of the Second Vatican Council, intensified evangelization efforts and the participation of the laity in the life of the Church. He promoted interreligious dialogue and the coordination of humanitarian and charitable initiatives. Cardinal Kim is hailed for leading and strengthening the Korean Church amidst various trials and tribulations, including political turmoil under a variety of military regimes. He was president of the Korean Bishops' Conference twice (1970-1975 and 1981-1987). He passed away on February 16, 2009. When he died at the age of 86, more than 400,000 citizens, Catholic and non-Catholic, flocked to Myeongdong Cathedral to pay homage to the beloved spiritual leader who united the nation. (PA) (Agenzia Fides, 9/6/2022)

ASIA/CHINA - Celso Costantini's “prophecy”, 100 years after his arrival in Beijing