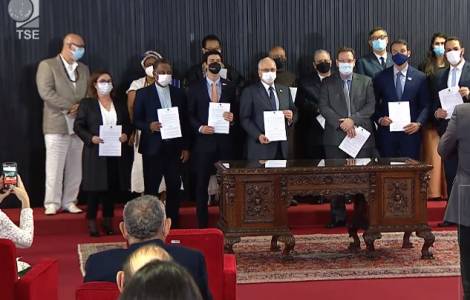 2022-07-20
Joint Statement of Seminarians: Challenges and Dreams of a Missionary and Synodal Church

Brasilia (Agenzia Fides) - The Superior Electoral Court (TSE, Tribunal Superior Electoral) and representatives of various religious realities, including the Bishops' Conference of Brazil (CNBB), signed yesterday, Monday, June 6, cooperation agreements to implement actions and projects that guarantee the peaceful nature of the general elections on October 2. On the occasion, according to the CNBB sent to Fides, Minister Luiz Edson Fachin, president of the TSE, thanked those present for their prompt willingness to collaborate "for a fundamental and urgent cause, linked to the preservation of the climate of serenity and the non-confrontational nature of the upcoming elections". According to the minister, the cooperation agreement aims to spread the ideals of respect, solidarity and social harmony as a way to eradicate the prospect of conflicts during and after the expression of the will of the people, in the context of the elections of 2 October 2022. By signing the agreement, the signatories will declare, among other things, their intention to promote, in homilies, debates, public statements, publications or by any other means, awareness-raising actions related to political tolerance, the legitimization of those who they have different ideas and the consequent exclusion of violence, all of which is considered indispensable for the maintenance of social peace. The National Conference of Brazilian Bishops (CNBB) was represented at the signing by the Secretary General of the CNBB, Msgr. Joel Portella Amado, Auxiliary Bishop of the Archdiocese of Rio de Janeiro. "The CNBB, which brings here the voice of Catholics - he said - expresses its joy and hope of being able to join its brothers and sisters of the different religious confessions, to express in unity the commitment already experienced for peace and tolerance in the upcoming and all elections. The bishop recalled that, at various times, the CNBB has ruled on the electoral process, and even issued a recent note in April supporting the institutions and officials of the Republic, warning about the religious manipulation of processes inherent to democracy (see Fides, 12/4/2022; 30/4/2022; 6/5/2022). (SL) (Agenzia Fides, 7/6/2022)

AFRICA/KENYA - Bishops' appeal to young people. "Go and vote and do not get carried away by violence"