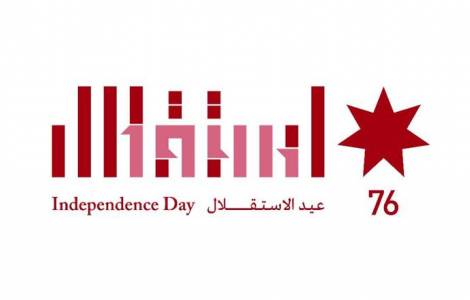 2022-05-25
76th anniversary of National Independence: the Churches renew their certificates of loyalty to the Hashemite Dynasty

Amman (Agenzia Fides) - The celebrations to commemorate the 76th anniversary of Jordan's independence begin today, Wednesday, May 25, and will last three days. The celebrations are especially extensive this year, with military parades, art events and fireworks shows organized in all the governorates of the Kingdom, after two years of lockdown due to the pandemic.. On this occasion, the Heads and representatives of all the Churches and ecclesial communities rooted in the lands crossed by the Jordan River wished to express with public messages their grateful closeness to those who govern the destinies of the Kingdom, renewing their loyalty to the Hashemite royal family and reaffirming its role as guardian of the Christian and Muslim Holy Places of Jerusalem claimed by dynastic tradition by Monarch Abdullah II bin Al-Hussein.
All the representatives of the different ecclesial groups - underlines the information portal abouna.org - wanted to pay tribute to a nation that "despite limited natural resources and the narrowness of its territory, has been able to overcome the limits of geography, the dilemmas of wars, the calamities, the setbacks", and over time "has offered shelter to the defeats of Arabism and shared its victories, becoming a shared homeland for Christians and Muslims". Among others, the Greek Orthodox Patriarch of Jerusalem, Theophilus III, invoked God's protection "over Jordan, its leader and its people" in his message, while Archbishop Yasser Ayyash, the Melkite Patriarchal Vicar of Jerusalem, wanted to reaffirm in the name of his Church loyalty, fidelity and love to our Hashemite leader", praying that the leadership of Jordan will always be preserved "from the crises and from all the conspiracies to which it is constantly exposed".
Archbishop William Shomali, Patriarchal Vicar for the Holy City of the Latin Patriarchate of Jerusalem, has renewed his gratitude "for the efforts of the Hashemites in defending the Islamic and Christian Holy Places of Jerusalem. We, the Palestinians, Muslims and Christians - Archbishop William added - ask God to protect His Majesty and the Hashemite family, so that Jordan remains a shining beacon and a safe harbor for its people and for those who come close to it". Father Joseph Soueid, Patriarchal Vicar of the Maronite Church of Jordan, has composed a poetic ode in honor of King Abdullah for the occasion. The days of celebration of Jordan's independence have been preceded by events that have once again brought to light the tensions and contrasts within the royal family. On May 21, a royal decree issued by King Abdullah II placed severe restrictions on the movements of Hamzah bin al-Hussein, the monarch's half-brother. Two days earlier, in a letter published in Jordanian newspapers, the King had explained the reasons for the harsh decree against his half-brother, stating that "During the past year or so Hamzah exhausted all opportunities to restore himself on the right path. I will not allow anyone - the royal letter reads - to place their interests above that of the nation, and neither will I allow my brother to disturb the peace of our proud nation". In the text released by King Abdallah, Hamzah is again accused of complicity with emissaries of unidentified foreign forces who seek to bring about "regime change" in Jordan. Abdullah and Hamzah are sons of Jordan's King Hussein (by two different wives), the ruler who ruled Jordan for nearly 50 years, and who died in 1999. Already last year, Hamzah was placed under arrest by his brother King Abdullah for his alleged involvement in an attempted coup. (GV) (Agenzia Fides, 25/5/2022)

AFRICA/GHANA - Ghana, so far spared from jihadist attacks, questions the threat of terrorism in the region

ASIA/IRAQ - Eviction for Christian refugees in Baghdad: the building where they live must become a shopping center