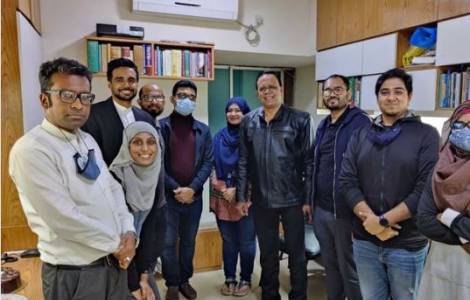 2022-08-03
Grandparents and the elderly, precious accompaniment in families

2022-07-27
Appeal by religious leaders: justice and security for religious minorities

2022-06-23
Men of service and proclamation of the Gospel: 13 new deacons for the Church, three of them tribal

Dhaka (Agenzia Fides) - Lay Catholics in the city of Dhaka enthusiastically participate in the different groups organized by the Church for the synodal journey. Recently, more than 40 Christian lawyers participated in a meeting in the Cathedral of Dhaka, in the presence of the Archbishop of Dhaka, Bejoy N D'Cruze, a member of the Congregation of the Missionary Oblates of Mary Immaculate, who addressed the formative theme proposed at the assembly. During meetings organized beforehand, nuns, teachers, NGO leaders, young people and lay leaders took part in exchanges and discussions, answering questions about the synodal process. Albert Rozario, president of the Christian Lawyers Association of Bangladesh, told Fides: "Christian lawyers were deeply inspired by the meeting on the Church on the synodal path. They also appreciated the fact that Archbishop Bejoy called them for an exchange of ideas and sharing". Rozario also said, "In our small Christian community in Dhaka, there are more than 100 Christian lawyers. During the synodal meeting, Christian lawyers expressed their desire to offer their professionalism free of charge to obtain justice for Christian victims in need. Inspired by their participation in the meeting, we underlined our willingness to do something for the Catholic Church". Rozario noted that the synodal journey will strengthen the Church: "I observe that the laity want to be more involved in the activity and pastoral care of the Church: it is necessary to involve them", he said. Nomita Gomes, a teacher who attended the synodal meeting earlier in the day, said she "feels an active part of the Church as a baptized person, that she feels called to be a missionary in the world, for other people who have learned to participate in the synodal journey. This will translate into my lifestyle and my love for my neighbour", she said, promising to engage in pastoral work. Archbishop Bejoy N D'Cruze, Archbishop of Dhaka and President of the Catholic Bishops' Conference of Bangladesh, said during the synodal meeting with the lawyers that the Church wants to involve every baptized person: "The meaning of the Church on the synodal path is union, participation and sending on mission. The whole Catholic Church is called to this work. This is why we need all the faithful, to make our Church ever more alive and strong thanks to union, participation and missionary work". The Archbishop concluded by inviting lawyers, and with them all the faithful, to be missionaries and to participate fully in the evangelizing mission of the Church. (FC/PA) (Agenzia Fides, 18/5/2022)

AFRICA/MALAWI - The Archdiocese of Lilongwe begins the diocesan Synod

ASIA/VIETNAM - Formation and missionary awareness of priests, crucial for the life of the Church, looking at the treasures of the past