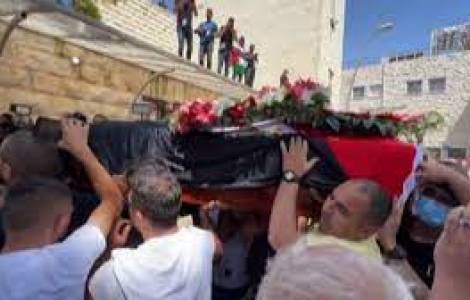 2022-05-30
Patriarch Pizzaballa: this is what Charles del Foucauld tells us, the Saint who "did nothing"

2022-05-27
In Jerusalem, the liturgical feast of the Ascension of Christ is also celebrated in a mosque

Jerusalem (Agenzia Fides) - The attack by the Israeli police on the funeral procession of the Palestinian journalist Shireen Abu Aqleh, who was killed on Wednesday 11th May during a raid by the Israeli army on a refugee camp, disregards the sensibilities of the Church and the memory of the victim and constitutes a "grave violation of international norms and regulations". With these words, the Patriarchs, Bishops and faithful of the Churches and Ecclesial Communities in the Holy Land deplore the violent action carried out on Friday, 13 May.
Police officers intervened while the coffin was being carried on their shoulders from St. Joseph's Hospital to the Melkite Greek Cathedral Church in Jerusalem's Old City. The Israeli police - reads the statement by church leaders in Jerusalem, who deplored the incident, "broke into a Christian health facility, disregarded the sensibilities of the church, the health facility and the memory of the deceased, and nearly forced the coffin bearers to almost let it fall". The Israeli police "attacked the mourners, hit them with batons, used smoke grenades, fired rubber bullets and frightened the hospital patients".
The raid - points out the text also released on behalf of Archbishop Pierbattista Pizzaballa, the Latin Patriarch of Jerusalem, and the Greek Orthodox Patriarch of Jerusalem, Theophilos III, "is a serious violation of international norms and regulations, including the fundamental human right of freedom of religion, which must also be observed in a public space".
In the explanatory note It was also recalled that St. Joseph's Hospital, which was the scene of the police raid, "has always been a place of encounter and healing for all, regardless of their religious or cultural affiliation, and will continue to be so". What happened last Friday deeply wounded not only the Christian community, the Sisters of St. Joseph of the Apparition, owners of the hospital, and all the hospital staff, but also all the people who found and still find peace and hospitality there". The sisters and staff of the St. Joseph Hospital - concludes the statement released on behalf of the Churches of Jerusalem - "have always ensured that their Institute is a place of care and healing, and last Friday's unfortunate incident makes that commitment even stronger than ever".
The day after the assassination, the Latin Patriarchate of Jerusalem expressed its "dismay" at the murder of the journalist, (see Fides, 12/5/2022), stressing that Shireen's death "revealed the need for a just solution in Palestine -Conflict, despite the fact that 74 years have passed since the Nakba (the exodus of 700,000 Palestinians fleeing the Israeli-occupied territories in 1948, ed.)".
In the patriarchal statement, prayers were assured "for the rest of the soul of Shireen, who was an example of devotion and a strong voice for his people". Let us pray – said the message of the Latin Patriarchate - that the Palestinian people find their way to freedom and peace". (GV) (Agenzia Fides, 17/5/2022)

ASIA/LEBANON - The Annual Assembly of Maronite Bishops begins. Patriarch Raï: may God show his power by giving peace to the world