VATICAN - On the beatification of Pauline Jaricot: first screening and presentation of the short film "To look from above" 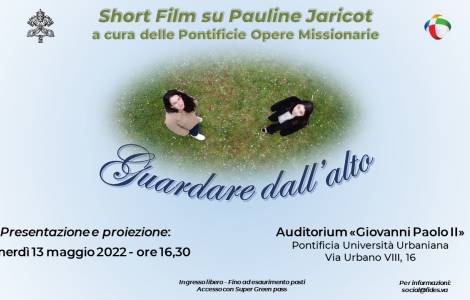 2022-08-08
Cardinal Jozef Tomko, Prefect Emeritus of the Congregation for the Evangelization of Peoples, passed away at the age of 98

2022-07-22
The short film on Blessed Pauline Jaricot whose date of birth occurs today, available in 4 languages

2022-07-04
Pope Francis: mission is born from astonishment and not from the skills of 'experts'

2022-06-21
Thirty years since "Redemptoris Missio" and "Dialogue and Proclamation": a Congress at the Urbaniana University

2022-06-20
The Pope to the Comboni Missionaries: the mission is based on the words of Jesus: "Without me you can do nothing"

Vatican (Agenzia Fides) - The short film of the forthcoming beatification of Pauline Jaricot made by Fides on behalf of the Pontifical Mission Societies is entitled "To look from above".
The presentation, which will be held next Friday, May 13 at 4.30 p.m. in the John Paul II Auditorium of the Pontifical Urbaniana University (via Urbano VIII n. 16), will be attended by: Archbishop Giampietro Dal Toso, President of the Pontifical Mission Societies; Father Tadeusz Nowak, Secretary General of the Pontifical Society for Propagation of the Faith POPF and Nataša Govekar, head of the theological-pastoral department of the Pontifical Dicastery for Communication. The director, the authors of the short film, some actors and production collaborators will be present in the room.
Mrs. Nataša Govekar, as well as the director and authors of the short film, some actors and production staff will be present.
The short film tells the story and faith experience of Pauline Jaricot through the eyes and life of Claire, a young woman of today and is conceived as a story within a story. The focus is on proclaiming the centrality of Christ in Pauline's life, so that viewers, especially young people, are drawn to the message she believed in, the gospel.
The choice fell on the so-called "story telling" because Pauline Jaricot's story is "a good story" capable of "transcending the boundaries of space and time. It remains relevant over the centuries because it is related to life nourishment". [See Message of Pope Francis for the 54th World Communication Day, n.2].
Through images and music, the film wants to convey the beauty and love that Jaricot found in God and that shaped her missionary passion, so that the audience can be drawn in, an authentic impulse of the Christian faith. For this reason, the film - available in five languages - will be intended for projections with the aim of missionary outreach and education, but it is also intended as a means of "missio ad gentes", a useful tool for initiatives of a "Church that goes forth ", in a non-Christian environment, and will be available to all National Directions of the Pontifical Mission Societies for this purpose.
For the shooting of the short film, the team traveled to the original locations in France. Young people from the “Chemin-neuf” movement, whose members devote themselves, among other things, to evangelization through art, as well as young members of the Pontifical Mission Societies in France, took part.
In addition to the places in Lyon where Jaricot had her faith experience, the filming locations also include Rustrel, a community in the Provence-Alpes-Côte d'Azur region known as the "Colorado of Provence" where Pauline Jaricot had founded the factory of Notre Dame des Anges.
The closing scenes of the short film also feature the young girl who experienced the miracle of healing through the intercession of Pauline Jaricot: Mayline Tran, a three-year-old child at the time of her healing. The Tran family participated in the final stages of the project, supports the project and speaks about their own experiences in the film's credits.
The production and promotion of the short film took place in collaboration with the National Directions of the Pontifical Mission Societies in Australia, Ireland, Great Britain, Spain, French-speaking Canada, the United States and Korea. (EG) (Agenzia Fides, 9/5/2022)

AMERICA/ARGENTINA - The Martyrs of Zenta: persevering in sowing the Gospel, peace and reconciliation among Indigenous groups, they gave their lives by forgiving their aggressors