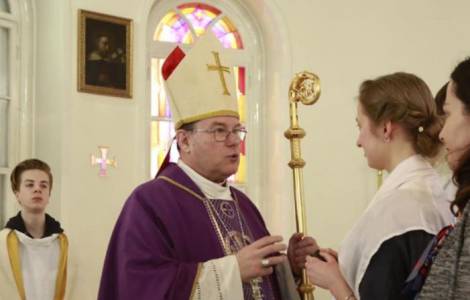 Moscow (Agenzia Fides) - "I think that these hopes for dialogue are well founded. I think that mistrust is more unfounded. This is what Msgr. Paolo Pezzi, Catholic Metropolitan Archbishop of the Mother of God in Moscow, affirms in a interview given to Agenzia Fides, offering some reflections on the need to always leave the door open to dialogue, as shown by the various attempts of Vatican diplomacy in the current difficult circumstances. Faced with the mistrust that often permeates the current debate in the West regarding a possible negotiated resolution of the conflict and a dialogue with the Russian government, he says: "I believe that our hopes, but perhaps also those of the Pope, are based above all on one aspect, namely that the other is never an enemy: he is 'other', 'other than us', different and probably also has different existential positions, but he remains a child of God, a man, a created being , with whom it is always worth seeking dialogue to solve problems".
Like all communities in the world, Catholics in Russia have been waiting since February for the end of the conflict, organizing various moments of prayer for peace, the most popular moment of which was the consecration to the Immaculate Heart of Mary on March 25, thanks also to the live broadcast on the Vatican Media YouTube channel, with commentary and Russian translation of Pope Francis' prayer. However, Archbishop Pezzi, underlining the need for a lasting peace, does not live in an expectation limited to the political sphere: "Personally, I live these days precisely in expectation, but I must be honest: we do not live not so much in the expectation that the international situation will improve, but in the expectation full of hope that a dialogue can be started and that peace, a lasting agreement, can be reached. For this reason, I believe that "it is inevitable to arrive at what we meditated on during Holy Week, namely that we must recognize the peace that Christ gives. Only then can we build a lasting peace".
(CD/PA) (Agenzia Fides, 6/5/2022)