AMERICA/ARGENTINA - Six Argentine missionaries in the Peruvian Amazon within the framework of the project "Argentine Church, Amazon is your mission" 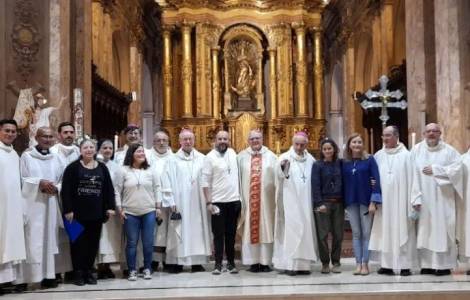 Buenos Aires (Agenzia Fides) - Six Argentine missionaries are leaving for the Peruvian Amazon: the Bishop of San Isidro and president of the Argentine Bishops' Conference, Msgr. Oscar Ojea, during a mass he presided over in the cathedral of Buenos Aires blessed them.
Together with two other missionaries who have already been sent, the Argentines will carry out their mission in the vicariate of Puerto Maldonado, within the framework of the project "Argentine Church, Amazon is your mission", promoted by the Argentine Pontifical Mission Societies with the support of the Episcopal Conference.
The Eucharist was concelebrated by the Archbishop of Corrientes, Msgr. Andrés Stanovnik OFMcap; the Bishop of Gregorio de Laferrere, Monsignor Jorge Torres Carbonell; the Bishop of Azul, Monsignor Hugo Salaberry SJ; the auxiliary bishop of Buenos Aires, Msgr. Alejandro Giorgi; Father Jerzy Marian Faliszek SVD, National Director of the Pontifical Mission Societies (PMS) in Argentina and priests linked to the mission.
In his homily, Monsignor Ojea expressed the immense joy that this missionary sending means for the Church because it manifests the diversity of the Church's charisms. The Prelate also recalled the characteristics of the "missionary disciples" enumerated by the Pope in "Evangelii gaudium", hoping that they can live them and put them into practice wherever they are sent. Within the framework of the "Argentine Church, Amazon is your mission" project, eight Argentine missionaries will be sent to the vicariate of Puerto Maldonado, in the Peruvian Amazon. To accompany this initiative, a logo has been created that will accompany the mission and that focuses on "a missionary Church with an Amazonian face". In the logo, 4 elements are shown, with the missionary colors that refer to the four dreams described by the Pope Francis in "Querida Amazonía": "I dream of an Amazon that fights for the rights of the poorest, of the original peoples, of the last, where their voice is heard and their dignity promoted"; "I dream of an Amazon that defends the cultural richness that highlights it, where human beauty shines in such diverse ways"; "I dream of an Amazon that jealously guards the irresistible natural beauty that adorns it, the overflowing life that fills its rivers and forests"; "I dream of Christian communities capable of giving themselves and incarnating themselves in the Amazon, to the point of giving the Church new faces with Amazonian features".
Furthermore, the circular shape of the logo refers to the universal unity: "Everything is connected". Its rivers, its jungle, its richness of flora and fauna and above all the variety and cultural richness and ancestral wisdom of its inhabitants that teach us to "live well" in harmony with the community, the earth and God. At the center the Cross, as a visible sign of the proclamation of the Gospel. Surround the Cross and dream, the motto that accompanies this missionary project along with the Argentine flag. (EG) (Agenzia Fides, 3/5/2022)