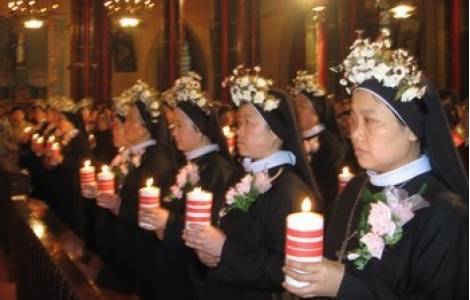 2022-06-24
Seminarians and nuns conclude their studies: new missionary resources for evangelization in China

2022-06-06
Bishop Pietro Wu Junwei dies of a heart attack. During the pandemic he had worked to keep churches and activities open

2022-05-18
Everyone has the right to a better life: the commitment of the "Nanjing Ark Charity Foundation" for the disabled

2022-05-04
The diocesan Seminary of Beijing opens the Marian Month: "Like Mary, we bring grace and joy freely received to all"

Beijing (Agenzia Fides) - Retracing history, deepening and reviving the charism of the founder by embarking on the synodal path: these are the objectives of the celebration of the 150th anniversary of the founding of the first indigenous female religious congregation in China, the Religious Congregation of St. Joseph of the Archdiocese of Beijing. Following in the footsteps of their founder, Msgr. Louis-Gabriel Delaplace, CM, then Archbishop of Beijing, since 1872 the sisters have continued their intense pastoral and missionary commitment, living community life, despite the pandemic and its consequences on the life of the Church. In fact, the sisters renewed their religious vows with the only virtual participation of friends and relatives.
The lay faithful have always been their first apostolic commitment, which is why they periodically promote an "Opening Day" to welcome lay people and also non-Christians. They live this occasion in four moments: presentation of the history and life of the congregation; guided visit; seminar or simple exchange meeting; prayer in the chapel. Each time they can accommodate more than a hundred people, not only Christians. In some circumstances they also invite the sisters studying at the national seminary in Beijing, who come from all over the country, to share their vocation and experience of community life. After 30 years of closure caused by the cultural revolution, the Beijing diocesan religious congregation dedicated to Saint Joseph reopened in 1986, with six young people from the suburbs of Beijing. Today the congregation celebrates 150 years of foundation with great achievements in the pastoral and evangelization field.
Currently the 49 nuns work in various dioceses, parishes, schools, clinics and in a nursing home. Candidates must possess the religious, cultural, psychological and moral aptitudes necessary to follow the high standards of community life. For their formation, courses are offered in Sacred Scripture, catechism, Church history, fundamental theology, canon law, liturgy, spirituality, philosophy and sacred music. There are also courses in physics, Chinese literature, Chinese moral tradition, social science, and foreign language. The motto of the congregation is taken from 1 Cor 9,19 ("I have become a servant of all to win the greatest number") and from Luke 17,10 ("When you have done everything that you have been commanded, say: We are useless servants. We have done what we had to do").
The Congregation was founded by Msgr. Louis-Gabriel Delaplace, CM, Bishop of Beijing, in 1872. According to historical sources, during a time of meditation and prayer, Bishop Delaplace was inspired by Saint Joseph to found a Chinese religious congregation. The proposal was discussed at the Vatican Council of 1870. After two years of preparation, with the help of the Canossian Sisters, the Congregation of Saint Joseph was founded in Beijing in 1872, whose nuns came exclusively from Beijing and its surroundings. Today there are nuns from various Chinese provinces. According to the founder, the main purpose of the Congregation is service (ecclesial and social) and mission. In 1941 the Congregation reformed its structure, changed its statutes and its religious habit, and added the profession of the vow of poverty (before the religious professed only the vows of obedience and chastity). The date of religious profession has always been linked to the feast of Saint Joseph. The activity of the sisters is carried out mainly in the fields of health and education, but they are always available for the requests and needs of the diocese. (NZ) (Agenzia Fides, 2/5/2022)

AMERICA/VENEZUELA - The diocesan phase of the Synod towards its conclusion: the results of 4,000 meetings are processed

AMERICA/COLOMBIA - "A Church moving forward in the Amazon, overcoming fears and apprehensions": visit to the Vicariate of Puerto Leguízamo-Solano