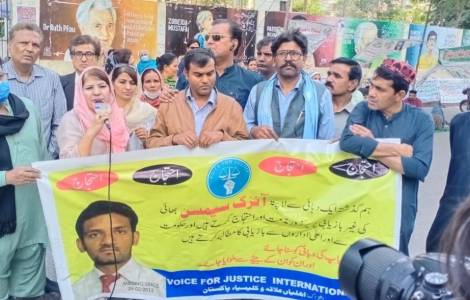 2022-06-30
The mission of the new priests: "Close to the Sacred Heart of Jesus and always merciful"

2022-06-17
Civil society in government: transparency in the 7th census, especially for religious minorities

Lahore (Agenzia Fides) - "The condition of religious freedom in Pakistan raises concern: we are witnessing dozens of episodes of mob violence, the improper use of blasphemy laws, forced conversions and desecration of places of worship. Violence in the name of religion is on the rise due to the government's lack of capacity to stop radicalization and religious extremism despite the fact that it should have been the priority agenda, a commitment to the 2014 National Action Plan to Combat Terrorism". This was stated in a note sent to Fides by Joseph Jansen, president of "Voice for Justice" (VFJ), a Pakistani organization committed to human rights and religious freedom.
Alongside "Voice for Justice", several civil society associations have spoken out after the US Commission on International Religious Freedom (USCIRF), an independent body, in the latest 2022 Report, notes that Pakistan " it has not taken effective measures to address violations of religious freedom, including mob violence and extrajudicial killings in the name of religion". Sharing these concerns, civil society urges the government to introduce measures to prevent acts of discrimination and violence against religious communities and to adopt political reforms to promote tolerance and diversity. Jansen reports: "We have observed that timely action by law enforcement in cases related to blasphemy allegations can help prevent mob violence and save lives. But this is only possible if the police do their job to maintain law and order and to protect the accused from extrajudicial killings". Asif Bastian, another leader engaged in VFJ, notes that "it is regrettable that simple accusations of blasphemy have become a justification for killing a blasphemer without any investigation, as evidenced in several episodes: the lynching of Priyantha Kumara Diyawadana in Sialkot on December 3, 2021; the lynching of Mushtaq Ahmed, a person with mental health problems in Khanewal on February 11, 2022; or the killing of a seminary teacher, Safoora Bibi in Dera Ismail Khan on March 29, 2022. This tendency to take justice in their own hands, with violence, must be discouraged to develop a society that respects the rule of law".
Carol Noreen, also a member of VFJ, welcomes the verdict of the anti-terrorism court in the case of the lynching of Priyantha Kumara which sentenced six offenders to death, nine to life imprisonment and 73 to prison terms ranging from two to five years. "The conviction of 88 defendants, in this case, will set a precedent for which no one is above the law and no one is authorized to spread hatred and take the law in one’s hand, using religion as a pretext", she notes.
Another aspect, notes VFJ, affects people accused of blasphemy even if they are not mentally healthy, as evidenced by the case of the Christian Stephen Masih, who has been behind bars for over three years even though the Punjab Medical Commission in the Institute of Medical Health recognized him as having "bipolar affective disorder" and called him "mentally unfit for trial" due to his psychosocial disability and health condition.
The Catholic Ashiknaz Khokhar, coordinator of Voice for Justice, concludes: "The government must take radical measures to stop the misuse of blasphemy laws, must protect victims from mass violence and enforce existing provisions to punish all those who they indulge in false accusations and resort to violence". (AG/PA) (Agenzia Fides, 30/4/2022)