AMERICA/PERU - The Bishops to the President and parliamentarians: "Assume your responsibility for which you were elected!" 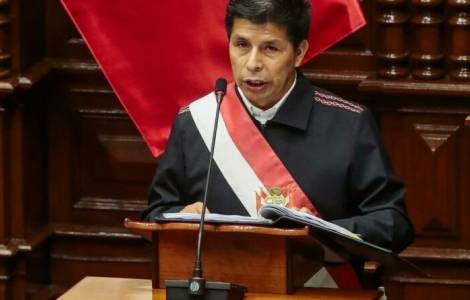 2022-04-29
The "Day of the Catechist": disciple-missionary called to live synodality

2022-04-22
The Bishops to the President and parliamentarians: "Assume your responsibility for which you were elected!"

2022-04-06
The Bishops: "crises cannot be resolved with the suspension of rights"

Lima (Agenzia Fides) - "The Peruvian Episcopal Conference, aware of the reality that Peruvians live in all corners of the country, makes an urgent appeal to their political leaders to assume the current situation with greater responsibility: putting aside selfishness; agreeing on the political reforms that are necessary and taking radical measures against corruption. Power must be at the service of the people and not at the service of their representatives or those who claim this condition, beyond what is established by our legal and social system. Once again, the Peruvian bishops vehemently claim it, in a document published on April 21 under the title "Responsibility, stability and respect for governability, in favor of the Peruvian people," which follows several previous pronouncements of the Episcopate on the same topic.
Since 2016, the political crisis that overwhelms the country has been aggravated by "the constant instability, which is generated by the various political actors and power groups". To this political crisis has been added the health crisis caused by Covid-19, which has shown "the serious shortcomings that the country has in terms of health and education." "The poorest and most vulnerable citizens are those who suffer the greatest impact from the consequences of this political instability" underline the bishops, recalling that the economic measures that have been taken in recent days, with the aim of generating more employment and productivity, are insufficient to face the harsh economic impact that the country is experiencing.
The Bishops also recall that according to article 110 of the Political Constitution, the President of the Republic "represents the Nation": "represents everyone in the same way, not a group or subordinate interests, much less political-party quotas ... His mission is to work for the general welfare of the Peruvian people". In nine months of the new administration, four cabinets of ministers have already been changed, this absence of leadership and the socio-political and economic horizon "are very worrying and require an immediate solution."
"Our weak democracy cannot withstand more instability", the bishops reiterate, stressing that it is not the Church's role to intervene in political matters, but "the serious crisis that the country is experiencing forces us to urge both the political class and civil society to seek and promote a democratic, transparent and honest dialogue to reach an authentic consensus".
For this reason, the Peruvian Episcopal Conference asks that particular positions be abandoned based on the greater good, establishing an agenda of priorities to satisfy the basic needs of the population, and concludes with this appeal: "Mr. President of the Republic and Members of Parliament, assume your responsibility for which you have been chosen! Democracy at this critical moment cannot be a reflection of the confrontation between State powers or of intransigent positions that contribute to greater instability. Democracy should lead us to seek governability and the common good, as well as ensure freedom of expression, independence of powers and respect for human dignity par excellence". (SL) (Agenzia Fides, 22/4/2022)