ASIA/TIMOR LESTE - The Archbishop of Dili to the president: the Constitution must be respected, for a prosperous and peaceful nation 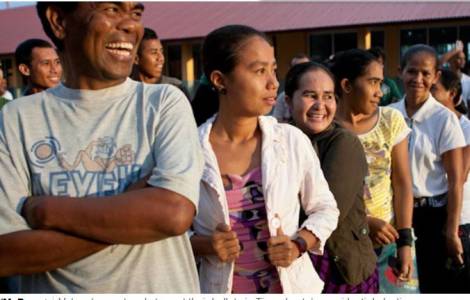 2022-04-22
The Archbishop of Dili to the president: the Constitution must be respected, for a prosperous and peaceful nation

Dili (Agenzia Fides) - "I hope that whoever is elected president returns to the state Constitution since it serves as a check on the country's capacity to operate properly", said Msgr. Dom Virgilio do Carmo da Silva SDB, Archbishop of Dili, capital of Timor Leste, expressing optimism that the elected president can and should respect and support the country's Constitution. Timor Leste held the second round of presidential elections on April 19. The independence leader and Nobel laureate Jose Ramos-Horta - former president of the country from 2007 to 2012 - has been re-elected president of Timor Leste for a second term. The country's presidential elections were held in two phases since no candidate received a majority of votes in the first round of voting last March 19. According to state election officials, Ramos Horta earned the most votes in the second round, 62.09 percent. He will be sworn in on May 20, the 20th anniversary of this Asia's youngest nation. According to state election officials, Ramos Horta won the highest number of votes in the ballot round, 62.09%. Francisco Guterres, the country's current president got 37.91 percent of the votes. The new president will be sworn in on May 20, the 20th anniversary of this Asia's youngest nation.
The Catholic Church in Timor Leste, a country with a Catholic majority, has always been a presence of balance and moderation: "We must maintain the constitution and instill discipline in all residents to permanently convert our nation into a peaceful, prosperous, and democratic society", Archbishop Da Silva said after casting his vote in Dili. The President, he pointed out, must act "as a father figure for the country's people and be respected by all political groups".
"As head of the country - he said - there should be no differentiation in service based on supporters, but rather that everyone must see the same thing because most of the country's people have already chosen their president, who must act as universal leader". The Salesian Archbishop congratulated the people of Timor Leste for their participation in the elections, both in the first and the second round, hoping that "the new president will work hard to get the country out of poverty".
"The common expectation for the new president is that, despite being elected from among party candidates, once elected, he will become 'the president of all Timorese'. Thus he would promote peace and stability than instability, chaos, and economic crises", explains Acacio Pinto, a social scientist from Dili, to Fides.
"I think the elections were held peacefully and people elected their president clearly", said Pinto.
"The country - continues Pinto - has recently found political stability since the beginning of last year and the economy has returned to grow after three years of recession and negative growth".
"The road to democracy - notes the analyst - has been challenging, as governments have struggled to combat widespread poverty, unemployment, and corruption".
As many as 42% of the people living in East Timor live below the poverty line, according to the World Bank's report. This is a result of the outbreak of the Covid-19 pandemic.
The nation gained independence from Indonesia in 2002, and has 1.3 million people. It is Asia's second most Catholic country (after the Philippines), with around 98.3% of the population baptized. (SD/PA) (Agenzia Fides, 22/4/2022)

AMERICA/BRAZIL - Towards the elections of October 2: the bishops meet the candidates

AFRICA/NIGERIA - President of the Bishops' Conference: "We are passing through the darkest chapter of our history"