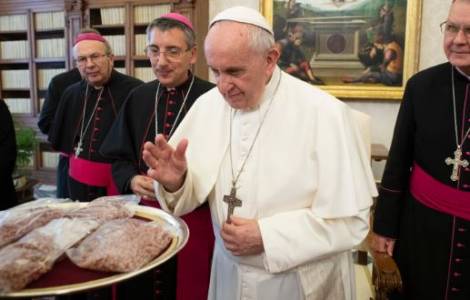 2022-04-22
A path of unity and brotherhood: first meeting of the newly formed Bishops' Conference

Milan (Agenzia Fides) - "The Pope's trip to Kazakhstan is very important news and has many links with the current crisis". This is what Father Edoardo Canetta, former Apostolic Vicar of Central Asia, told Fides, a missionary for twenty years in Kazakhstan, where he taught at the University of Karaganda, then at the National Eurasian Gumylyov University in Astana. Today parish priest in Milan and professor at the Ambrosian Academy in Milan, Father Canetta, following the announcement by the President of Kazakhstan of the visit of Francis (see Fides, 12/4/2022), said: "We must remember a significant historical precedent, when Saint John Paul II, without worrying about the contrary opinion of many, decided to go to Kazakhstan, 11 days after the attack on the twin towers of New York. I also remember with emotion the welcome of a people in which Catholics are a small minority, a people surprised to be the privileged witnesses of an event of peace that few were expecting".
Today, the priest continues, "once again a Pope goes to the steppe, taking the cue of a great interreligious congress to show that peace is possible. In this land there are many problems and also political and social issues, as events of a few months ago showed, but there is the possibility of peace".
The missionary recalls that Kazakhstan is home to a people made up of more than 100 different ethnic groups: "A land which was the scene of the great Stalinist deportations, which is struggling to find its own path towards democracy and which, despite everything, lives in peace. And if there are tensions between Christians and Muslims, between Kazakhs and Russians, there are those who prefer the path of peaceful coexistence".
"In the Kazakh language - observes Canetta - there is no single term for the word "hope": there are three, and they are all related to the theme of the road. There is the word "damiè", which means hope in the sense of something beautiful, tasty. It is the foretaste of a good that one expects at the end of a tiring journey. Then there is the word "medeu" which means hope in the sense of someone on whom you can count during the journey. Then there is the word "senim" which indicates hope as persuasion, trust, therefore faith: the certain hope that the road leads to a point of arrival, not only beautiful and tasty but, in a certain way, also definitive. Pope Francis will bear witness to this hope during his journey. This triple hope is necessary not only for Ukraine, but also for the whole world", concludes Father Canetta. (PA) (Agenzia Fides, 20/4/2022)

ASIA/PAKISTAN - The appeal of civil society to the government: Do not teach hatred towards minorities at school