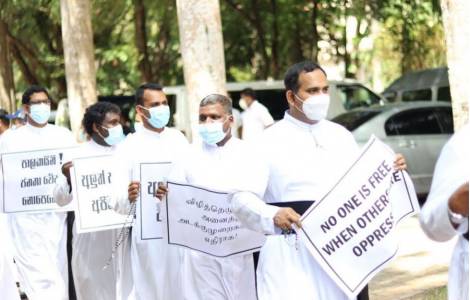 2022-04-27
Waiting for truth and justice: the Church commemorates the Easter massacres and visits the Pope

Colombo (Agenzia Fides) - "Our silence is a request for transparency and justice: people need justice. The biggest problem in Sri Lanka today is corruption. The population has lost faith in the political class and its leaders and calls for the immediate resignation of the President and the Prime Minister. The Catholic Church is on the side of the people, the poor, the needy, the least, and those who struggle to survive today. We fight alongside them for the challenges of daily life.
We desire a sustainable, equitable, peaceful nation. Let us raise our prayers to God for the good of the country": This is what Fr. Basil Rohan Fernando, Nation Director of the Pontifical Mission Societies in Sri Lanka says, who took part in the silent protest march organized by the Archdiocese of Colombo on April 5. Priests, religious, faithful, nuns, young people marched peacefully through the streets of the city, expressing their disappointment and dissent towards the political management of the nation. Father Fernando notes to Fides: "We want honesty and responsibility from our politicians. We also ask the international community for special attention to help Sri Lanka recover and get out of this serious crisis, which affects human dignity". While in the nation there is a shortage of food, medicines, fuel, reports the National Director of the PMS, people queue endlessly, prices are skyrocketing, there is electricity for a few hours and the population is really exasperated. Urgent structural interventions are needed above all in the name of transparency and the trust that people have lost in the current rulers. This is why new elections are called for".
The spokesman of the archdiocese of Colombo, Fr. Camillus Fernando, asked, on behalf of the Catholic Church, for "good leaders", stigmatizing "the short-sightedness of politics", urging "to choose the right people and take steps to ensure that the nation rises from this dangerous situation and that the future can be rebuilt, at all levels".
Protests and the escalation of the economic crisis have led to the resignation of 26 ministers in the current government, leaving only President Gotabaya Rajapaksa and his brother, Mahinda Rajapaksa, the Prime Minister, to manage current affairs.
Anti-government protests broke out in early March as Sri Lanka is experiencing the worst economic crisis in decades. The protesters accuse the government of poor management of the economy and of having created the currency crisis that have led to the shortage of essential goods such as fuel, cooking gas, milk, food, medicines.
In recent days, protests have at times turned violent and security forces deployed tear gas and water cannons. On April 1, the president declared a state of emergency in an attempt to quell protests, allowing the arrest and detention of suspects without a warrant, and limiting fundamental rights. During the state of emergency, authorities imposed a 36-hour curfew nationwide. Despite this, thousands of demonstrators, including students, continued to take to the streets. (PA) (Agenzia Fides, 7/4/2022) 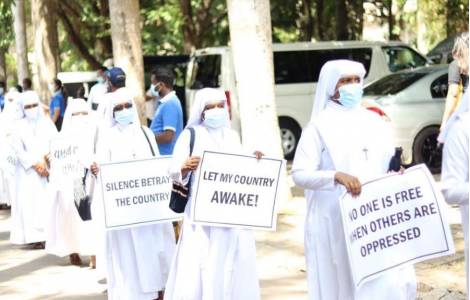 ASIA/PAKISTAN - Rights, education and religious freedom: effective laws and policies for the protection of minorities are urgently needed

AMERICA/ARGENTINA - The Bishops: " The bread that is asked for all, achieved through their own labor, is a cry for justice"