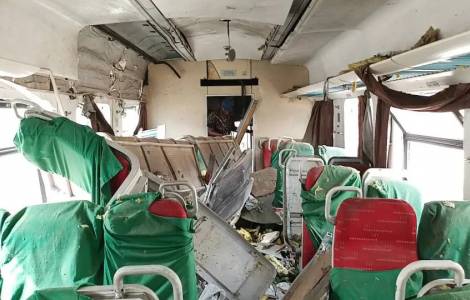 2023-01-25
The Nigerian Bishops' Conference: 'Published figures of priests killed or abducted are incorrect'

Abuja (Agenzia Fides) - "We are not interested in money, the federal government knows what we are asking for". In a video message posted yesterday, April 6, the group that attacked the train along the Abuja-Kaduna line on March 28 (see Fides, 30/3/2022), threatened to kill the captured hostages if their demands (which have not been made public) were not met.
During the attack, eight people were killed and several others injured; the bandits also captured a number of hostages (according to the railways, around 100 passengers are still missing). The video, which is less than two minutes long, shows four bandits with one of the passengers, Alwan Hassan, general manager of the Bank of Agriculture.
One of the kidnappers, who spoke in Hausa, said that the hostage was released because of his age and in the spirit of Ramadan: "We are the group that kidnapped passengers on the train few days ago. Among them is this man that was pleading with us due to his old age and we felt pity on him due to the month of Ramadan, so, we want to give him back to his family". "But the government should not misunderstand this, as it is a gesture we made because of the pity we had on him". The bandits then asked the hostage to make some remarks that he "will be released but I want to assure that I have left behind a large number of people who are in a situation that requires their quick release. I hope the government will meet the leader of this group to free them as soon as possible". The family confirmed the release of the hostage. The video was allegedly filmed at Polwire's Forward Operating Base, Birnin Gwari, along the Kaduna-Birnin road in Kaduna State, which was attacked on April 5. During the attack, 11 soldiers lost their lives. In the video, the terrorists, dressed in military uniforms, use the burnt carcass of an army armored vehicle as a backdrop. Also on April 5, villages in Kaduna State were attacked, killing at least 17 people. Members of the mysterious group that attacked the train and took the hostages are generically defined as "bandits", but references to the month of Ramadan suggest they are jihadists. The state of insecurity in Nigeria was denounced this week both by the bishops and by Mohammed Sa'ad Abubakar III, sultan of Sokoto and President of Jama'atu Nasril Islam, the union of Nigerian Islamic organizations (see Fides, 5/4/2022). (L.M.) (Agenzia Fides, 7/4/2022)

AFRICA/NIGERIA - Assault on the airport in Kaduna, capital of the homonymous State where two priests have been kidnapped in recent weeks

AFRICA/MALI - The drama of the village of Douna, threatened by jihadists