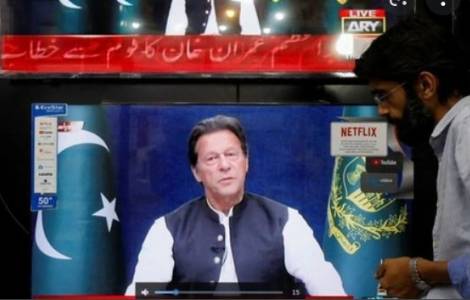 2022-06-17
Civil society in government: transparency in the 7th census, especially for religious minorities

2022-05-31
Christians wanted to carry out the most humble jobs: the Punjab government puts an end to this practice

Karachi (Agenzia Fides) - "There is a very embarrassing political situation in the country. I am sorry to say that politics these days is a type of selfish politics: all political leaders, including their parties, focus only on their own good and that of their political parties, and not on the good of the people of the country. Pakistan is currently going through a serious crisis: for money, members of political parties sell their loyalty, for them "money matters more, people change their political affiliation choosing the party where they get the most personal benefits": this is the comment made to Agenzia Fides by Fr Mario Rodrigues, priest of the Archdiocese of Karachi after Prime Minister Imran Khan's government dissolved the Assembly on April 3, 2022. Father Mario Rodrigues says: "Politicians have the task of working for the construction of society, not only for the construction of roads, they must work for the improvement of the situation of the poor. Pakistan is in a bad economic situation , currency devaluation is underway, prices of basic necessities are rising, people are struggling to survive".
The political crisis arose from a "motion of no confidence" against Imran Khan, presented by the opposition political parties on March 7, 2022. The vote on the motion is scheduled for Sunday, April 3, 2022. On that day, the Prime Minister did not appear in Parliament. A federal minister raised an objection to the "motion of no confidence" and said it was against Article 5 of the Constitution of Pakistan which stipulates "loyalty to the state and obedience to the Constitution". After listening to the Federal Minister, the Vice-President rejected the motion without seeking the opinion of the opposition. The Prime Minister addressed the nation saying that he would ask the President to dissolve the National Assembly. The President immediately dissolved the National Assembly and called elections in 90 days. In a protest action, the opposition parties, united by 195 deputies, called their own session of the National Assembly and chose their own President. The President of the Supreme Court therefore took note of what had happened and requested a "Suo Moto" hearing to regularize the institutional situation. Father Bonnie Mendes, one of the oldest priests in the country, told Fides: "The political situation in Pakistan is very sad. The Constitution is not respected. There is political chaos. In no society does one behave like this and disobey the law". The priest observes: "The people are very disappointed and for the bad management of the situation. Imran Khan's claim to build a new Pakistan has ended in failure".
Tabassum Yousaf, Christian lawyer, head of the Community of Sant'Egidio in the Archdiocese of Karachi, speaking to Agenzia Fides, says: "It is a very uncertain situation, the intervention of the High Court does not know where it is going to lead the country. Political leaders are setting a bad example, not working in accordance with the law and the state constitution".
Ashiknaz Khokhar, a Christian human rights activist from Sahiwal, said: "It is a worrying situation, we are in a state of confusion, for a power struggle, but it is damaging the image of the country". He added, "we are praying for the good of Pakistan". (AG-PA) (Agenzia Fides, 5/4/2022)