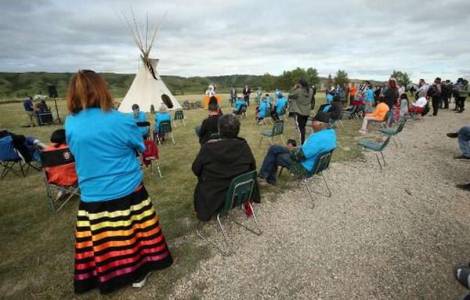 2022-05-16
The Bishops: "As we prepare to welcome the Holy Father, we continue the journey of healing and reconciliation"

2022-04-04
The dialogue between Catholic Bishops and indigenous delegates continues, to achieve "a brighter future"

2021-09-28
Prayer is the foundation of all effective mission animation, not only for Mission Sunday, but all year round

2021-08-18
Prayer and sharing for the Mission, in the footsteps of St. John Paul II and Pauline Jaricot

Ottawa (Agenzia Fides) - A delegation of 32 Indigenous Elders, knowledge keepers, residential school survivors, and youth will journey together from across the country, left Canada to meet with Pope Francis in Rome. These delegates, who were selected in collaboration with the Assembly of First Nations (AFN), the Métis National Council (MNC), and the Inuit Tapiriit Kanatami (ITK), bring a depth of lived experience and insight on the legacy of residential schools and the impacts of colonialism. Many of them are directly engaged in the ongoing journey of healing and reconciliation. The Indigenous delegations will be accompanied on the journey to Rome by the Most Rev. Raymond Poisson and the Most Rev. William T. McGrattan, together with other Bishops particularly involved in this field.
"As Canadian Bishops, we are grateful to these delegates for walking with us on this journey and to Pope Francis for his attention to their suffering and his deeply-held commitment to social justice", said CCCB President, the Most Rev. Raymond Poisson, in the note sent to Fides.
"We expect that these private encounters will allow the Holy Father to meaningfully address both the ongoing trauma and legacy of suffering faced by Indigenous Peoples to this day, as well as the role of the Catholic Church in the residential school system, which contributed to the suppression of Indigenous languages, culture and spirituality". According to information released by the CCCB, after the private meetings with the Holy Father, a final audience with Pope Francis is scheduled for Friday, April 1, whereby the official delegates will be joined by a larger group of Indigenous Peoples. The audience will provide an opportunity for the Holy Father to publicly respond after listening intently to delegates throughout the week.
In October 2021, the CCCB invited the Holy Father Francis to make an apostolic visit to Canada, also in the context of the pastoral process, which has been underway for some time, of reconciliation with indigenous peoples. His Holiness has expressed his willingness to go to the country. In preparation for the Pope's visit, a meeting has been planned with the representatives of indigenous peoples, so that they can open their hearts to the Pope, sharing sufferings, hopes and desires. Initially, the meeting was scheduled for the end of December 2021, then postponed due to the pandemic. (SL) (Agenzia Fides, 28/3/2022)

AMERICA/BRAZIL - "No to deaths and degradation in the Amazon"

AMERICA/HONDURAS - The Bishops: "Despite the difficulties, a new horizon is in sight"