AMERICA/COLOMBIA - Attacks on religious freedom and freedom of worship 'deplorable and unacceptable', bishops call for dialogue 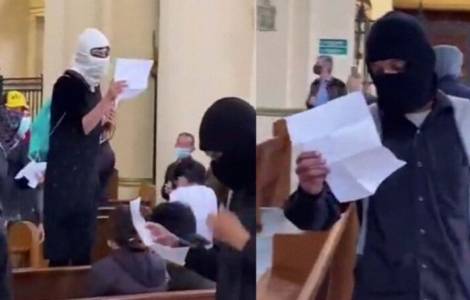 2022-06-30
Fire in the Tuluá prison: the authorities called to "watch over and accompany the life and social reintegration of detainees"

2022-06-21
Archbishop Rueda Aparicio: "it is important that we look at the present and the future of Colombia"

2022-06-14
"A Church moving forward in the Amazon, overcoming fears and apprehensions": visit to the Vicariate of Puerto Leguízamo-Solano

Bogotà (Agenzia Fides) - During the month of March, acts violating the right to freedom of religion and worship took place in several ecclesiastical jurisdictions in Colombia. The latest occurred last Sunday, March 20, in the Cathedral of the Archdiocese of Bogota, when a group of hooded men entered the temple during the celebration of the Eucharist shouting insults against the State and the Church.
Monsignor Luis José Rueda Aparicio, Archbishop of Bogotá and President of the Bishops' Conference (CEC), said that these are "acts of irrationality" which turn out to be "deplorable and unacceptable signs". However, the Archbishop wanted to send a message of hope and reconciliation: "Let us continue to love even those who hurt us. Let us offer them love with dignity, without hatred, as Jesus Christ the Lord lived and taught us: 'Father, forgive them, they do not know what they are doing'. " As reported by the CEC note, the director of the Department for the Promotion of Unity and Dialogue (PUD) of the Bishops' Conference informed that the ecclesiastical authorities have decided not to submit any formal complaint in this regard. However, he specified that the Directorate of Religious Affairs of the Ministry of the Interior, in a letter addressed to the Department, declared itself very attentive to this fact, since it constitutes a precedent in the violation of the right to religious freedom and worship. Indeed, everyone has the right to profess their religious convictions and to practice their faith collectively and publicly, without being disturbed, as established by law 133 of 1994. The priest also added that "in this case, no one can claim freedom of expression if it violates the right to freedom of worship". In any case, without minimizing the seriousness of the fact, "it would be interesting to carry out a listening exercise, in synodal harmony, to find out why these people have chosen the church to spread their message of protest and facilitate a scenario of dialogue and reconciliation, at the invitation of the Archbishop of Bogotá". Other attacks on freedom of religion, freedom of worship and freedom of conscience took place in Popayán (Parroquia de La Milagrosa) and Medellín (Parroquia de San Ignacio de Loyola), where two churches were vandalized on March 8, with pro-abortion graffiti and offending life advocates. On the same day, a group from the "40 Days for Life" movement received verbal insults and sabotaged the prayer service it was organizing in Bogotá. Finally, on March 17, in Ibagué, two parish churches (La Anunciación del Señor and María Reina) were also vandalized with graffiti and paint. The episcopate has activated an email (pud@cec.org.co) through which complaints can be filed regarding violations of freedom of religion and worship. (SL) (Agenzia Fides, 25/3/2022)

AFRICA/NIGERIA - "We are not terrorists!": More than 700 Nigerian priests peacefully protest at the funeral of the priest killed in Kaduna