AMERICA - "Missionary conversion" at the center of the online Lenten retreat, promoted by the Pontifical Mission Societies 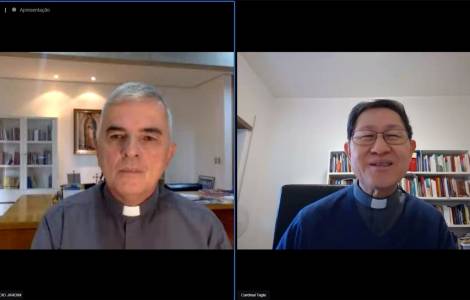 2022-07-15
CELAM's message: "It is time to go out, to walk together, it is time for martyrdom and encounter with everyone"

2022-07-04
The Bishops of Paraguay, Colombia and Venezuela gather for their Plenary Assembly: Synodality at the center

2022-06-30
The Bishops after the massacres of Melilla and San Antonio: the hardening of migration policies is ineffective, we must expand the possibilities of regular migration

2022-06-17
The Bishops of Central America: "We hear the cry of the Nicaraguan people and we are saddened by the situation they are going through"

Brasilia (Agenzia Fides) - "In this 3-day Lenten retreat and six meditations, what touches us most on the journey of missionary conversion is the witness of faith, ardor and boundless missionary passion of the founders of the four pontifical Societies. Having a missionary heart means having a heart without borders with the desire to share the good news of Jesus Christ. If the heart does not burn, the feet do not walk": this is what Father Maurício da Silva Jardim, coordinator of the PMS in America and National Director of the PMS of Brazil, tells Fides. From March, 23 to 25 an online Lenten retreat was chaired by Cardinal Luis Antonio Gokim Tagle, Prefect of the Congregation for the Evangelization of Peoples and by the members of the PMS International Executive Committee.
The event - explains the Director - is part of the extraordinary time of grace for the Pontifical Mission Societies marked by the fourth centenary of the foundation of the Congregation for the Evangelization of Peoples, by the bicentenary of the foundation by Pauline Jaricot of the Pontifical Society for Propagation of the Faith and one hundred years since the declaration of the pontifical character of missionary works.
More than two hundred participants, mostly Portuguese and Spanish, but also French and English, took part in the retreat that opened on March 23 with the meditation of Cardinal Luis Antonio Tagle who dealt with the theme "A People of Pilgrims and Evangelizers", followed by Father Dinh Anh Nhue Nguyen, OFM Conv, Secretary General of the Pontifical Missionary Union, who spoke about "Vocation and missionary conversion in St. Paul the Apostle and Paolo Manna, founder of the PMU".
The retreat, guided by two daily meditations, then continued with Father Guy Bognon, PSS, Secretary General of the Pontifical Society of St. Peter the Apostle, who dealt with the theme "The missionary vocation of Jeanne Bigard, founder of POSPA" and, immediately after , with Sister Roberta Tremarelli, AMSS, Secretary General of the Pontifical Society of Missionary Childhood who dealt with the theme "The missionary vocation of Msgr. Charles de Forbin-Janson, founder of POSI". Father Tadeusz Jan Nowak, OMI, Secretary General of the Pontifical Missionary Society for the Propagation of the Faith, spoke about "The missionary vocation of Pauline Jaricot, founder of POPF", while Archbishop Giampietro Dal Toso, President of the PMS, concluded the retreat with a reflection on "The Christian vocation and missionary conversion".
Father Dinh Anh Nhue Nguyen underlined to Fides: "We give thanks to God for the time he has granted to each of us and with gratitude we feel called in these special days to reflect seriously in order to be once again "on the way to a missionary conversion", as the title given these exercises announces. In addition, the theme of missionary conversion is very current. Pope Francis recalled it in the latest Apostolic Constitution on the Roman Curia and his service to the Church and the world 'Predicate evangelium', promulgated a few days ago". (E.G.) (Agenzia Fides, 25/3/2022)

VATICAN - Cardinal Jozef Tomko, Prefect Emeritus of the Congregation for the Evangelization of Peoples, passed away at the age of 98

ASIA/VIETNAM - Lent without restrictions: Catholics return to the churches