ASIA - The implications of the war in Central Asia: between ethnic-linguistic divisions and new arrivals from Russia 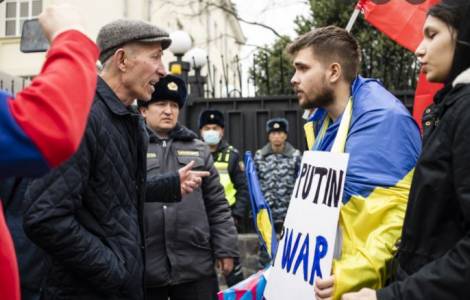 Milan (Agenzia Fides) - The war in Ukraine and the consequent sanctions imposed by the West on Russia are leading to developments that also affect Central Asia. Fr. Edoardo Canetta, a missionary in Kazakhstan for twenty years, five of them as Vicar General of Central Asia, now a professor at the Ambrosian Academy in Milan, tells Fides. From the ecclesial point of view," said Father Canetta, who follows events in the region and in the local churches closely, "I have been told that in some Catholic communities the antagonism between those who are on the side of the Russians and those who side with the Ukrainians surfaced. It must be said that in reality, families in Central Asia are mixed and this fact can be a problem for the communities. There is a lot of work to be done to make Catholics understand that ethnicity is secondary to belonging to the Church, which is called 'Catholic' precisely because it is universal and not tied to a nation".
In addition, explains the priest, there is a migration from Russia to the states of Central Asia, former Soviet republics, which could have unforeseeable economic and social repercussions: "Since last week already, many Russian families are settling in this region: it is a presence that can even be seen in the streets. They arrive counting on the support of relatives who have remained in Central Asia because, although 30 years have passed since the independence from the Soviet Union, there are still many family ties between Russians and people from Central Asian countries. On the one hand, there are young people from Russia who want to escape military service; on the other hand, entrepreneurs who, unable to work in Russia because of the sanctions, want to re-establish their businesses in countries like Kazakhstan or Uzbekistan. The locals do not seem to like it, because they have been working for years to cut the umbilical cord with Russia and now the past seems to be coming back to the fore, not to mention that these entrepreneurs would be competing with the local economy ". In particular, Kazakhstan, Don Canetta points out, seems to want to distance itself from Russia: "The Kazakh government, which until recently had the support of the Russian army to suppress the riots at the beginning of the year, now has an equidistant attitude, but perhaps more inclined towards Ukraine than towards the Russian side. Suffice it to say that on March 14 and 15, two humanitarian aid planes left not for the part of the country controlled by Russia, but towards the Polish border, to help the Ukrainians, and this is not a minor detail", he concludes. Catholics represent a minority in Central Asian countries: it is, in fact, a geographical area with a Muslim majority, where the Church was reborn following the fall of the Soviet Union and the consequent end of religious persecutions. Today there are 70 parishes in Kazakhstan, 5 in Uzbekistan, 3 in Kyrgyzstan, 2 in Tajikistan, while in Turkmenistan about 250 faithful meet in the Chapel of the Transfiguration of the Lord in the capital Ashgabat. (LF-PA) (Agenzia Fides, 22/3/2022)

AFRICA/CONGO - Caritas: More than 2,600 refugees from the DRC are in a precarious situation; the Bishops of the DRC call for a march for peace on December 4

ASIA/IRAQ - Eviction for Christian refugees in Baghdad: the building where they live must become a shopping center

ASIA/SRI LANKA - Between poverty and discontent, the nation struggles to recover from the economic and social crisis