AFRICA/D.R. CONGO - The Pontiff will celebrate Mass near the site of the ambush on Ambassador Attanasio 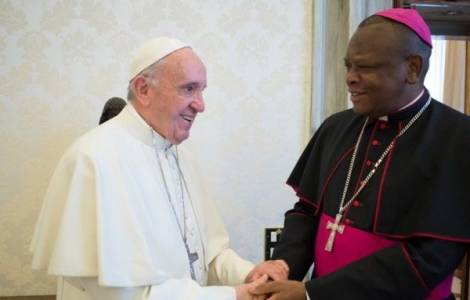 2022-06-18
Bishop Kimbeni, newly elected in Kisantu: "The population is united and close to the Holy Father"

2022-06-13
Resignation and appointment of bishop of Tshumba

Kinshasa (Agenzia Fides) - Pope Francis will celebrate a Mass not far from the place where, on February 22, 2021, the Italian Ambassador in Kinshasa, Luca Attanasio, was killed. This was announced by sources from the government of the Democratic Republic of Congo, according to which Pope Francis will celebrate Mass in the village of Chegera, in the Buhumba group, in the Nyiragongo territory, about 15 km north of Goma, on the Goma-Rushuru road ( Nord-Kivu), a road axis where Ambassador Attanasio was ambushed, along with his bodyguard, Vittorio Iacovacci, and the driver, Mustapha Milambo.
In the village, work has begun on an area of about 1,200/2,000 meters that can accommodate at least two million people. It is planned to organize spaces for a stage, a car park, places for guests, but also to rehabilitate part of the road that had been engulfed by lava during the last eruption of the Nyiragongo volcano (see Fides, 2/6/2021).
In addition to the memory of the ambush of the Italian ambassador and his companions, Chegera has another symbolic value: in fact, 5,000 families, victims of the volcanic eruption of May 2021, were evacuated from this area. Pope Francis' visit to the Democratic Republic of the Congo from July 2 to 5 is also the occasion for the start of work on the Sanctuary dedicated to Blessed Isidore Bakanja in Bokote, in the province of the Equator, more than 1,000 km from Kinshasa. The ceremony for the start of the renovation of the sanctuary, held on March 14, was attended by the Archbishop of Mbandaka-Bikoro, His Exc. Msgr. Ernest Ngboko; the Bishop of Bukungu-Ikela, His Exc. Msgr. Toussaint Iluku; and the Secretary General of the National Episcopal Conference of Congo, Msgr. Donatien Nshole. "We will soon have the honor of welcoming the Holy Father on an apostolic visit to the DRC", said Msgr. Ernest Ngboko. "And in this context we have thought of enhancing the site of our faith, the symbol of the Catholic Christian faith here in Congo: Blessed Isidore Bakanja". (L.M.) (Agenzia Fides, 18/3/2022)

VATICAN - Pope Francis: mission is born out of gratitude. And the apostles are witnesses, not managers