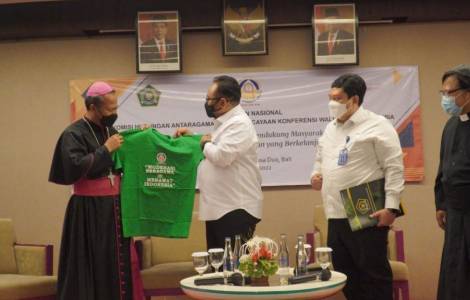 2022-06-20
A 'big sea' of social charitable activities: the Camillians in Flores after the Covid-19 pandemic

2022-06-18
Resignation of the Bishop of Sanggau and appointment

2022-06-15
Civil society and religious communities: "No" to an entrance fee for the Borobudur temple and places of worship

2022-05-17
Camillians of the island of Flores, in view of new ordinations, express joy for the newly elected Superiors

Jakarta (Agenzia Fides) - The government of the Republic of Indonesia expects the Catholic Church to promote religious moderation and count on the precious contribution of Catholics to sow harmony, respect, tolerance, fraternity among communities of different faiths. This is what the Indonesian Minister for Religious Affairs, Yaqut Cholil Qoumas said, speaking at a recent seminar organized by the Commission for interreligious dialogue within the Episcopal Conference of Indonesia. At the conference held in Bali in recent days, attended by representatives of the nation's 37 Catholic dioceses, Minister Qoumas reiterated the government's commitment to strengthen "religious moderation", social harmony and peaceful coexistence among citizens of different religious affiliation in society. "Thanks to an approach based on respect, moderation and tolerance, tensions between the followers of different religions are reduced. Through acts of religious moderation we can meet and promote mutual cooperation", said Minister Qoumas. Minister Qoumas expressed his personal desire to invite both Pope Francis and the Sheikh of Al-Azhar, Ahmed Al-Tayeb, to come together on a pilgrimage to Indonesia, to promote brotherhood between Christians and Muslims. "They will be able to see that in Indonesia there is friendship, collaboration and dialogue in the ordinary and daily life of Christian and Muslim believers", he pointed out, recalling that Indonesia is a pluralist nation, with different languages, ethnic groups, cultures, religions. Minister Quomas said he was favorably impressed by the openness and goodwill of Pope Francis, shown on many occasions, also towards Indonesia and its civil and religious representatives.
The Commission for the Interreligious Dialogue of Indonesian Catholic Bishops, led by the President Msgr. Yohanes Harun Yuwono and Executive Secretary Fr. Agustinus Heri Wibowo welcomed the minister's words: "For us Indonesian Catholics what is called the 'middle ground' is precisely our choice and the way forward. If all Indonesian citizens - each with their own cultural and religious background - offer a contribution to the community and to the common good, with maximum freedom and without the intervention of intransigent groups, then life in a pluralistic society is wonderful and fun", comments to Fides Father Heri Wibowo, recalling the nation's motto, "Unity in diversity". (MH-PA) (Agenzia Fides, 18/3/2022)

EUROPE/RUSSIA - Ecumenical dialogue and theology: "responsibility towards oneself and towards society"