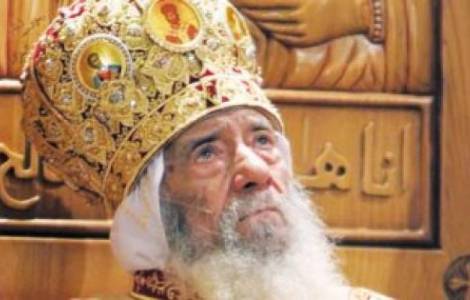 Cairo (Agenzia Fides) - "He taught us not to complain, seeing that he never complained, despite the many difficult circumstances he went through". With these words, the Egyptian priest Antonios Thabet, of the Coptic Orthodox diocese of London, recalled an intimate trait of the figure of Pope Shenuda III, the Coptic Orthodox patriarch who died on March 17, 2012, at almost 89 years of age.
Shenuda, with his figure, his teaching and his work, has profoundly marked the last century of the history of the Coptic Orthodox Church. Today, Thursday, March 17, Coptic Orthodox Patriarch Tawadros II also celebrated a divine liturgy at Saint Mark's Cathedral in Cairo in memory of his predecessor, which was attended by a large group of Coptic metropolitans and bishops. Articles and interviews devoted to Shenuda have multiplied in the Egyptian media and in newspapers linked to the Coptic Orthodox Church, his spiritual teachings have been re-proposed, and anecdotes and events from his biography have been recounted, such as the friendship that united him to the great Sunni preacher Muhammad Metwalli al Shaarawy.
Born in August 1923, he graduated from Cairo University and then from the theological seminary of the Coptic Orthodox Church. The future Patriarch became a monk upon entering al Suriany Monastery, in the Wādī al-Natrūn region. There he was entrusted with tasks in the field of education and training of seminarians. The formation of Pope Shenouda took place in the context of the so-called "Coptic renaissance", characterized by the rebirth of monasticism and the strong impact of the "Sunday schools" of catechesis, which had fostered and nurtured the renewal of the entire pastoral care of the Church Coptic, contributing to the formation of new generations of monks and priests and to the rediscovery of Coptic theological and spiritual traditions.
Shenuda had become 117th Pope of Alexandria and Patriarch of the See of St. Mark on November 14, 1971.
In 1973, Pope Shenuda was the first Coptic Orthodox Patriarch to meet with the Bishop of Rome following divisions in the early Christian centuries over Christological controversies. During Shenouda's visit to Rome, he and Pope Paul VI signed the Common Christological Declaration, a document of strong doctrinal importance, which among other things stated that the Church of Rome and the Church of Alexandria share the same faith in Jesus Christ, "God perfect as to His Divinity, and man perfect as to His humanity". On September 3, 1981, Egyptian President Anwar al Sadat sentenced Pope Shenuda to forced confinement in the Anba Bishoy monastery in Wādī al-Natrūn. Eight other bishops, 24 priests and many leading members of the Coptic community were arrested. Sadat replaced the Coptic hierarchy with a commission of five bishops. On January 2, 1985, more than three years after Sadat's assassination, the new President Hosni Mubarak released Pope Shenuda from forced isolation. Back in Cairo, Patriarch Shenuda celebrated the divine liturgy of Christmas on January 7, in front of more than 10,000 faithful. (GV) (Agenzia Fides, 17/3/2022)