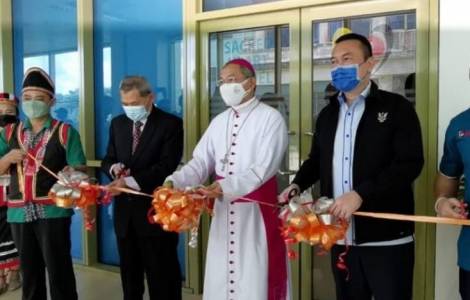 Kuching (Agenzia Fides) - The Chapel of the Sacred Heart, the first Christian chapel built inside a hospital in Malaysia, was inaugurated at the Sarawak Heart Center in Kota Samarahan. The structure was blessed by Catholic Archbishop Simon Poh, Archbishop of Kuching and President of the Association of Christian Churches in Sarawak, a Malaysian state located on the island of Borneo.
The idea of building a chapel for Christian worship was proposed in 2019 and with the support of Dr. Mohd Asri bin Riffin, director of the medical facility, responsibility for the design of the chapel was given to the Church Catholic. The need was felt above all in response to the request to be able to attend Sunday mass, expressed by the Christian medical staff and by hospital patients. In previous years, in fact, mass was celebrated once a month in small rooms temporarily assigned to them. Bishop Po echoed the words of Richard Lon, Director of the Unit dedicated to religions, pointing out that, although the chapel was built and entrusted to the Catholic Church, it is available to all Christian denominations. Construction began in April 2021 and was completed on December 15, 2021, with joint state and church funding.
The opening ceremony, held a few days ago, was attended by Archbishop Poh, hospital administrators and senior officials. In a symbolic gesture, Archbishop Poh turned on the chapel lights as he read the Bible verse from Genesis (Gn 1:3) "Let there be light". In his address, the Prelate expressed his joy, saying that the building represents "a blessing from God", and that it is intended to be "a place of exchange and harmony between religious communities and cultures in order to promote the spirit of a united family". "I hope the opening of Sacred Heart Chapel in Pusat Jantung Sarawak will be a model for the rest of Malaysia", he said. "We must work as a human family, not only in Malaysia but all over the world. We must be brothers and sisters to each other because we are all created by the same God, by a God who loves us", he said. Significant, he added, will be the place for the sick who "in pain will seek God and want to draw strength from above, finding it in prayer".
The chapel is indeed a place "to pray, to promote physical, spiritual or emotional healing". Archbishop Poh celebrated the first mass in the chapel where Christian celebrations will be held regularly. (SD-PA) (Agenzia Fides, 12/3/2022)

ASIA/CHINA - Priestly ordinations on the solemnity of Saints Peter and Paul: in the footsteps of the Apostles, the mission of evangelization is strengthened

ASIA/MONGOLIA - Msgr. Marengo: "Accompany the faithful on their journey with the light of the Gospel"

AFRICA/IVORY COAST - Cardinal Kutwa: "The Diocese of Grand-Bassam, the gateway to faith"