VATICAN - Pope Francis will confer the ministries of catechist, lector upon lay men and women from different continents 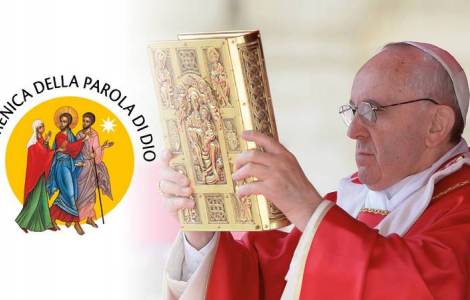 2022-05-24
Pontifical Mission Societies: Shaping the future with a view to the history of its origins

2022-05-23
Pope Francis: May Pauline Jaricot's example arouse in everyone the desire to participate in spreading the Gospel in the world

2022-05-21
The Pontifical Missionary Union: Formation, animation and missionary awareness with a fraternal and synodal style

Vatican City (Agenzia Fides) – The Sunday of the Word of God January 23 is observed annually on the third Sunday of Ordinary Time, ever since Pope Francis established this celebration on 30 September 2019. Pope Francis will preside over the celebration in St. Peter’s Basilica at 9.30 am. As highlighted by the Pontifical Council for Promoting the New Evangelization, on the occasion the Holy Father will present to those present a volume containing a comment by the Fathers of the Church on chapters 4 and 5 of the Gospel of Luke.
During the liturgy, the ministry of Lector and Acolyte will also be conferred on lay women and men for the first time will be conferred upon both lay men and women, as Pope Francis established by publishing the Motu Proprio Spiritus Domini on January 10, 2021. The Holy Father will also confer the ministry of Catechist to some lay faithful, women and men, established through the publication of the Apostolic Letter Antiquum Ministerium, dated May 10, 2021. "There is a multitude of lay people who have directly taken part in the spreading of the Gospel through catechetical teaching - underlines the note -. Men and women animated by a great faith and authentic witnesses of holiness who, in some cases, were also founders of Churches, even going so far as to give their lives. Even today, many capable and tenacious catechists are at the head of communities in different regions and carry out an irreplaceable mission in the spreading and deepening of the faith".
Each of these two ministries is conferred through a rite. Before the homily, the candidates will be summoned, called by name and presented to the Church Before the homily, candidates. After the homily, those called to the ministry of lector will be presented with a Bible, while catechists will be entrusted with a cross, a reproduction of the pastoral cross used first by Saint Paul VI, then by Saint John Paul II, to recall the missionary character of the service they are preparing to administer.
Two people from the Amazonian region in Peru will be formally made catechists by the Pope, along with other candidates from Brazil, Ghana, Poland and Spain.
The ministry of lector will be conferred on lay Catholics from South Korea, Pakistan, Ghana and Italy.
Due to travel restrictions related to the outbreak of the omicron variant of COVID-19, candidates from the Democratic Republic of the Congo and Uganda will not be able to take part in the Mass, as originally planned. (SL) (Agenzia Fides, 22/1/2022)

ASIA/HOLY LAND - Israeli reassurances: the status of the Mount of Olives will not be changed without consulting the Churches

ASIA/IRAQ - Towards the "Nineveh Fast". Patriarch Sako: help us to rejoice in the salvation of others and to free ourselves from any rigorism

AMERICA/CHILE - Catechists, servants of the synodal spirit, to build a more fraternal Chile

AFRICA/SOUTH AFRICA - The drama of Durban, hit by floods in April, has consequences for all of southern Africa