AMERICA/SAN SALVADOR - Beatification of the four martyrs, the diocesan Postulator: "Our vocation is to follow the Lord" 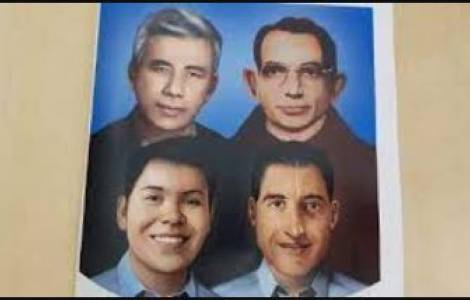 2022-01-27
Massacre of Jesuits: Film reconstructs what happened in 1989 and what is still happening today

2022-01-24
The four martyrs beatified: "May their heroic example arouse in everyone the desire to be courageous agents of fraternity and peace"

2022-01-22
CLAR on the new martyrs: "The commitment and defense of the poorest were their death sentence"

2022-01-22
Beatification of the four martyrs, the diocesan Postulator: "Our vocation is to follow the Lord"

2022-01-17
On January 22, the beatification of four martyrs: witnesses of an outgoing Church, which announces the Kingdom of God with words and deeds

2021-12-01
Water is a precious resource and a right: the Bishops ask to stop pollution and to ratify the reforms

San Salvador (Agenzia Fides) - "Father Rutilio Grande, on March 12, 1977, went to San José to preside over a Eucharistic celebration during the novena in preparation for the patronal feast of St. Joseph. On the way back to Aguilares, he was accompanied in a car by a catechist, Manuel Solórzano, by the young Nelson Rutilio Lemus and by three children. Halfway there, their car was machine-gunned by some armed men and Rutilio, Manuel and Nelson died instantly. The children were saved. St. Óscar Arnulfo Romero, Archbishop of San Salvador, was deeply shaken by the assassination and personally presided over the funeral Mass in the Cathedral Church of San Salvador. Father Rutilio was 49 years old". Thus reports to Agenzia Fides, Archbishop Rafael Urrutia, Chancellor of San Salvador, recalling that today, Saturday, January 22, Father Rutilio Grande, Jesuit, Manuel Solórzano and Nelson Rutilio Lemus Chávez, lay people, and the Italian Franciscan Fray Cosme Spessotto are proclaimed blessed.
Msgr. Rafael Urrutia is also the diocesan postulator for the causes of Msgr. Romero and Father Rutilio Grande. "Rutilio - says Msgr. Rafael - was committed to developing creative methods of evangelization, beginning to meet periodically with the members of his parish to interpret social and political reality in the light of the Gospel. By creating basic church units that taught Bible reading, he continued, he began to educate and train community leaders, proclaiming the legitimacy and right of the poor to organize themselves in associations and trade unions".
In the name of the Gospel, Father Grande denounced a reality that went against the will of God for his people, which was not poverty, but a project of fraternity and justice: "I want long tables for everyone, Father Rutilio often repeated, "with chairs for everyone and Jesus seated in the middle.
A Church as a space of consolation for the poorest".
The Episcopal Conference of El Salvador (CEDES) has in recent weeks published aids to prepare spiritually for beatification, urging all the baptized to be "martyrs", that is, "witnesses" to Jesus Christ in the different situations of life and of the builders of the Kingdom of God, as were the blessed martyrs. "Remembering the martyrs – Msgr. Urrutia concluded - does not mean cultivating hatred and revenge towards their assassins, but that our vocation is to follow the crucified Lord and work for the reconciliation of the peoples".
The Mass with the rite of Beatification will take place at 5 p.m. in the Square of the Divine Savior of the World, in front of the Cathedral of San Salvador, and will be presided over by Cardinal Gregorio Rosa Chavez, Auxiliary Bishop of San Salvador. (ES) (Agenzia Fides, 22/1/2022)