ASIA/CHINA - From Mariology to the Fathers of the Church: 20 years of "academic evangelization" of the Beijing Institute for the Study of Christian Culture 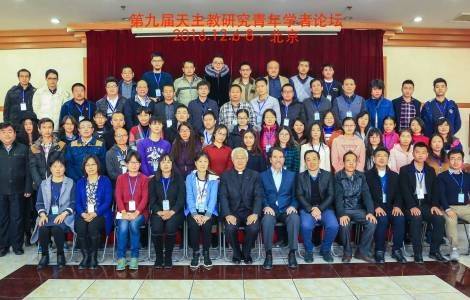 2022-05-18
Everyone has the right to a better life: the commitment of the "Nanjing Ark Charity Foundation" for the disabled

2022-05-04
The diocesan Seminary of Beijing opens the Marian Month: "Like Mary, we bring grace and joy freely received to all"

2022-04-13
The synodal journey of the sisters of Leshan, in the footsteps of the "Woman among women"

2022-04-12
Prayer, relationship with Christ, new ways of evangelizing: the Beijing Seminary continues its synodal journey in the spirituality of Lent

Beijing (Agenzia Fides) - "The Academy .... is also a force of evangelization, which belongs to the present of the Church and her mission", writes Pope Francis in the message to the participants in the XXIV Public Session of the Pontifical Academies (December 4, 2019). In its modest structural dimensions, the Beijing Institute for the Study of Christian Culture of the archdiocese of Beijing, has been traveling the path of evangelization through the search for truth and Catholic academic research for 20 years, without prejudices or interests, always trying to consolidate the fruitful link between the Gospel and culture indicated by Pope Francis.
Since it was born on August 3, 2002, the Institute has always promoted the study of various themes through debates, conferences, publications, seminars, forums, training courses, scholarships, international exchanges ... as reported by Fides (9/11/2005, 13/12/2010, 19/12/2016). The topics covered range from Mariology to Saint Ambrose, to the Doctors and Fathers of the Church, to Ratzingerian thought, to the contributions of Chinese and foreign missionaries to evangelization and social development in China, among other topics.
The Institute has registered an ever-increasing participation of authoritative academics, scholars, Chinese ecclesial personalities, scholars of Christianity, even of international fame, who have offered a series of useful proposals for the evangelizing mission in Chinese society.
The missionary work of the Catholic Church in China is therefore not limited to the field of social service or charitable assistance, but is also carried out in the academic field. The cultural laboratory represented by the Beijing Institute for the Study of Christian Culture was a pioneer in mainland China, paving the way for dialogue between the inculturation of faith and the evangelization of cultures.
Founded by Fr. Peter Zhao Jianmin, Vicar of the Archdiocese of Beijing, who graduated in Canon Law at the Katholieke Universiteit Leuven in Belgium, the first Chinese priest to obtain a doctorate after opening to the Church in China, at the end of the 1970s, the Institute has as its purpose the study of religious culture, especially Christian, promoting greater harmony between Catholicism and traditional Chinese culture. It has several international collaborators and important academic partners, both Chinese and international, such as the Social Academy of Beijing and the Katholieke Universiteit Leuven.
In 2003 he began a series of training courses (also at weekends to meet the needs of young people) and study seminars on the theme "Catholicism and Ethics", publishing the texts in the "Journal of Catholic Studies", published periodically by the Institute. On the solemnity of the Epiphany 2007, a scholarship was set up where more than 20 young scholars have benefited to date. Since 2008 it has organized an annual Forum (Forum on Catholic Studies for Young Chinese Scholars) at the beginning of December, usually on the Solemnity of the Immaculate Conception, of which 12 editions took place until 2019, before the pandemic, with over 500 participants. All the texts presented at the Forum are subsequently published in the Journal of Catholic Studies. (NZ) (Agenzia Fides, 21/1/2022)