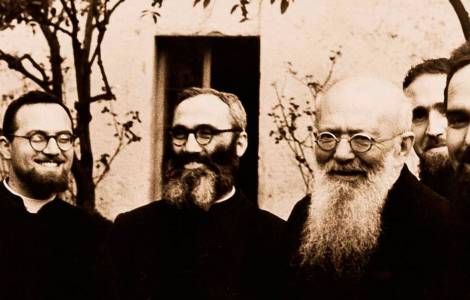 2022-05-23
Pope Francis: May Pauline Jaricot's example arouse in everyone the desire to participate in spreading the Gospel in the world

2022-05-21
The Pontifical Missionary Union: Formation, animation and missionary awareness with a fraternal and synodal style

Vatican City (Agenzia Fides) - The Pontifical Missionary Union (PMU), one of the four Pontifical Mission Societies, was founded by Blessed Father Paolo Manna and recognized by Pope Benedict XV on October 31, 1916 with the name of "Missionary Union of the Clergy". Saint Paul VI called it "the soul of the other Pontifical Mission Societies".
Paolo Manna was born in Avellino on January 16, 1872. In 1891 he entered the Seminary for Foreign Missions in Milan, which would become the Pontifical Institute for Foreign Missions - PIME. Ordained a priest on May 19, 1894, he was sent as a missionary to Burma (now Myanmar). In twelve years of missionary activity, he returned to Italy three times for serious health reasons, the last time, in 1907, to his great sadness. The missionary spirit that continued to burn in his heart led him to embark on the path of missionary animation through preaching and printing. He wanted not only to make known the progress of the faith in the world and to collect help for the missionaries through prayers and offerings, but above all to make the Church more aware of carrying out its task of evangelization, with more missionaries and native clergy.
As editor of the magazine "Le Missioni Cattoliche", and especially with his first work "Missionari autem pauci" (The missionaries are few), he aroused a wave of enthusiasm for the missions and a large number of missionary vocations: thus begins his great task of missionary animation of all the clergy to which he devotes himself without sparing his efforts. His plan to found a "Missionary Union of the Clergy" was realized in 1916, with the approval of Pope Benedict XV.
The first International Congress of the Union, on January 3, 1922, highlighted the need for the teaching of Missiology in seminaries, a subject still unknown in Catholic training institutes. Fr. Manna insisted in his increasingly numerous publications on the irreplaceable role of priests in proclaiming the Gospel and on the education of the missionary conscience of the entire people of God.
In his encyclical "Maximum Illud" (1919), Pope Benedict XV recommended the presence of the Union in all dioceses, thus favoring its widespread dissemination. In that context, Father Manna dedicated himself to a great activity of preaching and printing activity, inspiring bishops, priests and laity to the missionary ideal. His motto was "All Missionaries!". For Fr. Manna, all the baptized, but above all every priest is a missionary, and he lamented how the first and fundamental function of the Church, the evangelization of the world, of the whole world, was neglected by priests, thus preceding what the Council would have solemnly declared Vatican II.
In addition to priests, men and women religious, as well as consecrated lay people, were recognized as natural missionaries. In 1949, with the decree "Huic Sacro", the Congregation of Propaganda Fide also opened up the possibility of joining the Union. By a decree of October 28, 1956, the Union was conferred by Pius XII the title of "pontifical" and was renamed the "Pontifical Missionary Union of Clergy, Religious and Consecrated Laity", known simply as the "Pontifical Missionary Union" (PMU). With the Apostolic Letter "Graves et increscentes" of September 5, 1966, St. Paul VI expressed his recognition to the PMU, recommending it again to all the bishops of the Church.
Fr. Manna was also Superior General of his Institute from 1924 to 1934, and in 1926 the Seminary for Foreign Missions of Milan joined the Missionary Seminary of Rome, giving birth to the Pontifical Institute for Foreign Missions (PIME). From 1937 to 1941, Father Manna was the International Secretary of the Union. In 1943, he became Superior of the province of southern Italy and moved to Ducenta, to the Sacred Heart Seminary for Foreign Missions, which he himself had created.
His "Observations on the Modern Method of Evangelization", in which he proposes a different formation of indigenous seminarians and the establishment of local Churches entrusted to an indigenous clergy, are the result of these years of commitment. Late in life he developed his universal missionary plan, "Our 'Churches' and the Propagation of the Gospel", inviting ancient churches to establish missionary seminaries to participate directly in world evangelization and to help young Churches of mission. Father Paolo Manna died in Naples on September 15, 1952.
St. John Paul II proclaimed him Blessed on November 4, 2001, and in the homily at the Mass presided over in St. Peter's Square he said: "In Father Paolo Manna we also see a particular reflection of the glory of God. He devoted his entire existence to the missionary cause. In every page of his writings the person of Jesus, the center of life and the meaning of mission, comes alive". (SL) (Agenzia Fides, 14/1/2022)