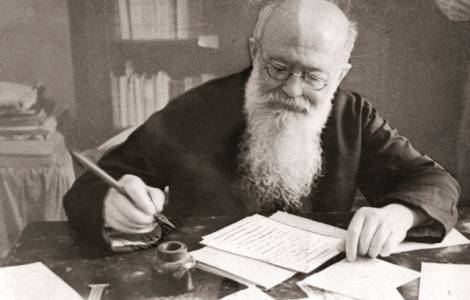 2022-05-20
The charism and proposals of the Pontifical Society of Missionary Childhood: child-friendly experience of ecclesial communion

2022-05-09
On the beatification of Pauline Jaricot: first screening and presentation of the short film "To look from above"

Vatican News (Agenzia Fides) - "The news of missionary activities: Blessed Paolo Manna and the contemporary world" is the theme of the two meetings for prayer and missionary reflection organized on Saturday 15 and Sunday 16 January, on the occasion of the 150th anniversary of the birth of Blessed Father Paolo Manna, founder of the Pontifical Missionary Union (UPM).
Father Paolo Manna (Avellino January 16, 1872 - Naples September 15, 1952) was a missionary in Burma (now Myanmar) for 12 years. After returning to Italy for health reasons, he devoted all his energy to the missionary animation of priests and of all the people of God, through his preaching and his writings.
To celebrate the 150th anniversary of his birth, the Pontifical Missionary Union (PMU)/Pontifical Missionary Societies, the International Center for Missionary Animation (CIAM), in collaboration with the Association of Priests, Men and Women Religious of Myanmar in Rome, the National Direction of the Pontifical Missionary Societies in Myanmar and the Pontifical Urban College, have planned two evenings.
On Saturday, January 15, at 3 p.m. (Rome time), a debate will take place at the CIAM headquarters on the theme "Focus Myanmar". The subject will be "Father Manna's missionary activities in Myanmar".
Historical notes and reflection on the current situation".
Fr. Dinh Anh Nhue Nguyen and Sister Monika Juszka will also speak. At 3:45 p.m., the rosary will be prayed for Myanmar.
The second appointment is for Sunday, January 16, on the theme "Focus Italy and Missionary Works". At 6:30 p.m. (Rome time), in the chapel of the Pontifical Urban College, the Archbishop President of the Pontifical Mission Societies, His Excellency Giovanni Pietro Dal Toso, will preside over the solemn vespers in the liturgical memory of Blessed Paolo Manna. At 7 p.m. there will be a debate on "Father Manna and the promotion of the mission and missionary works in Italy". Historical Notes and Relevance of Evangelical Missionary Zeal Today", moderated by Fr. Dinh Anh Nhue Nguyen and Sr. Monika Juszka.
Online participation via Zoom is open to everyone, and can also be followed on Facebook.
https://www.facebook.com/JesuitYouthMyanmar/
First Evening (15 January)
https://us02web.zoom.us/j/85821560949?pwd=a3FrTnFnV3BuYkNJV2llSGpsNjlRUT09
Meeting ID: 858 2156 0949 Passcode 4Dy4yP
Second evening (16 January)
https://us02web.zoom.us/j/89443748654?pwd=ZFRRN05abVJPUWVXN2dSandyaWlsQT09
Meeting ID: 894 4374 8654 Passcode Wet1k2
Father Dinh Anh Nhue Nguyen, OFM Conv, born in Qui Nhon (Vietnam), is Secretary General of the Pontifical Missionary Union (PMU), as well as Director of the International Center for Missionary Animation (CIAM) and Director of Fides Agency.
Sister Monika Izabela Juszka RMI, was born in Łódź (Poland). After high school, she entered the Congregation of the Claretian Missionary Sisters of Mary Immaculate. She graduated in pedagogy at Cardinal Stefan Wyszyński University in Warsaw. She studied theology at the Pontifical Faculty of Theology Bobolanum in Warsaw and at the Pontifical Urbaniana University in Rome. She continued her studies in theology with a thesis on the theology of missionary spirituality: "The missionary spirituality of the Christian in the writings of Blessed Father Paolo Manna (1872-1952)". She worked in several schools and kindergartens in Poland and Italy. Since 2015 she has been a member of the National Direction of the Pontifical Mission Societies in Poland, working within the National Secretariat of the Pontifical Missionary Union. Since January 1, 2020, she has been the national secretary of the Pontifical Missionary Society for Children in Poland. (SL) (Agenzia Fides, 14/1/2022)